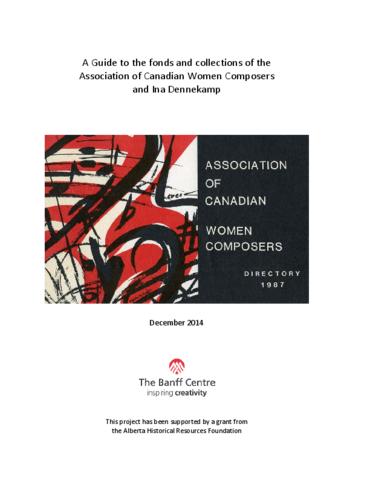 Following a series of organizational meetings initially arranged by founder Carolyn Lomax, the Association of Canadian Women Composers (ACWC) was officially established on November 2, 1980. The purpose of the organization was to promote the music of Canadian women composers and provide for them a support system. From November 1980 to May 1982, the ACWC was governed by an interim Board of Directors, consisting of a President, Chairperson, Secretary, Treasurer and two other board members. In March 1981, the ACWC drafted a constitution which confirmed this governing structure, requiring that a new board of directors be elected by ACWC members at the first Annual General Meeting, which took place in May 1982. As many as 9 board members were to serve terms of two years. Subsequent constitutional and by-law changes eliminated the position of President and established other positions with varying responsibilities.

Records were donated between 1988 and 2010 by various individuals to the ACWC archives. Individual donations were not retained together, and information on donation provenance was not recorded. The materials were transferred to The Banff Centre Archives in 2011 as part of the records of the ACWC. During processing in 2014, the project archivist separated these records from the organizational records of the ACWC.

The Paul D. Fleck Library & Archives at The Banff Centre