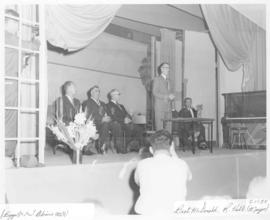 In 1948, due to the Cold War and the threat of nuclear conflict, the Government of Canada inaugurated a proactive program that would aid in the aftermath of a nuclear attack. Throughout Canada, all levels of government worked together to form civil defence associations. These associations, funded by federal, provincial and municipal governments, were trained in disaster awareness, and would aid survivors after a nuclear attack took place. By 1957, a Civil Defence Association was active in Athabasca and participated in provincial training sessions. The Athabasca and District Civil Defence Unit would remain active throughout the Cold War but was eventually disbanded sometime after 1973. In 1961 Civil Defence formed a committee called Athabasca Emergency Measures Organization.

The custodial history of the fonds is unknown.

The fonds consists of materials created by the Athabasca and District Civil Defence Unit between 1957 and 1973. The fonds consists of minutes of meetings of Athabasca and District Civil Defense Unit, financial statements, correspondence, notes, brochures and general information about civil defense programs. The photograph is of a provincial Civil Defence meeting. Athabasca's representatives are Steve Berezan and Harry Bayliss.