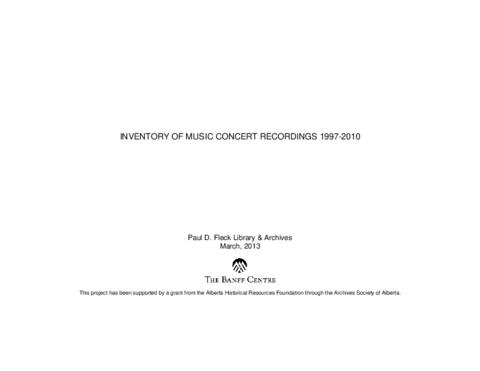 9.5 m of textual records and other material

Music programs at the Centre began in 1936 with a two-week course in musical composition, interpretation, and performance for piano. A course in choral singing was added in 1938. Based on the model of the piano master class, additional programs in operatic singing and violin began in 1949 and 1951. Public chamber music recitals sponsored by the department began in 1953. In 1959 courses in music theory and woodwinds were added, followed by courses in teaching music to children in 1964 and additional master classes in brass (1966), percussion (1972), and classical guitar (1975). In 1971 the Banff School of Fine Arts Symphony Orchestra was revived with a series of guest conductors. Although a Jazz Workshop was launched in 1964, the Jazz Program was not established until 1974. Also in 1974 two additional programs were established: the Academy of String Quartets and the Canadian Chamber Orchestra Training Program, both for young professional musicians seeking advanced training with guest directors and conductors. Four Academies were added between 1978 and 1980, for Piano Chamber Music, Woodwinds, Brass, and Vocal Chamber Music. When the Centre adopted year- round programming in 1979, Advanced Studies in Music was founded to provide musicians and composers with 4-26 week residencies for independent studies. In 1983, the department sponsored the first of the triennial Banff International String Quartet Competitions. Courses in computer music and sound engineering were added in 1992 and 1994. The Department was responsible for the Voice and Opera programs until 1974. Music Department administration was coordinated by Section Heads until 1975 when the master classes in piano, strings, woodwinds, and brass, and courses in music theory were combined into the Music Performance Program under a single Artistic Director. In 1982 an additional office of Music Department Manager was established to assist the Artistic Director. In 1994 the department was renamed Music and Sound. Artistic Directors of Music and Sound include Thomas Rolston (1975-), Robert Aitken (1985-1989), and Isobel Moore Rolston (1989-).