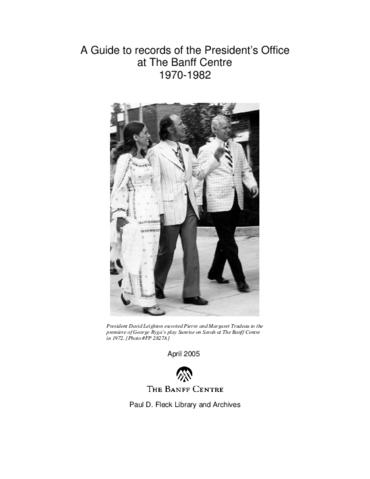 The President, appointed by the Board of Governors in accordance with Section 19 of the Banff Centre Act, is the Chief Executive Officer of the Centre, responsible for its general operation, including academic work and staff, administrative staff, and business affairs. The Board may assign other duties to the President at its discretion and the President may delegate powers and functions to other officers of the Centre. The President reports annually to the Board. Prior to 1982 the title was "Director." Presidents/Directors include Donald Cameron (1936-1969), David Leighton (1970-1982), Paul Fleck (1982-1992), and Graeme McDonald (1993-).

Records pertaining to the governance of the Banff Centre for the period 1933-1967 are in the custody of the University of Alberta Archives.