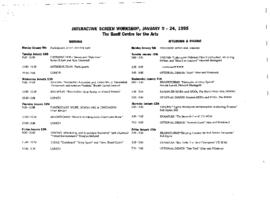 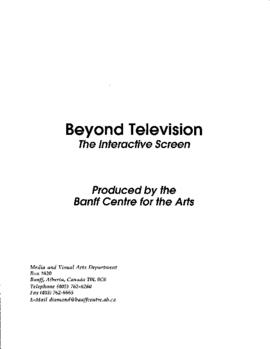 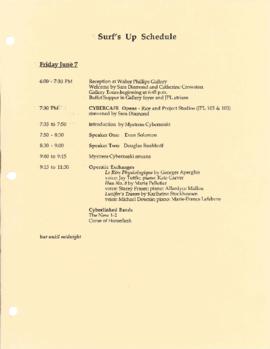 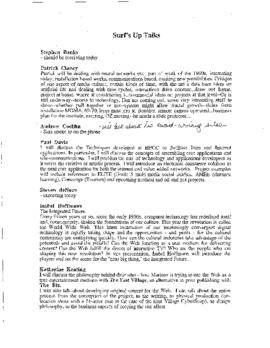 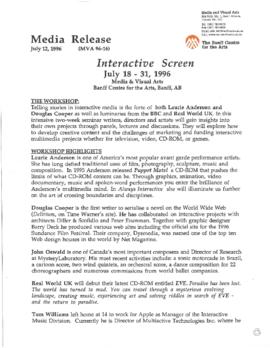 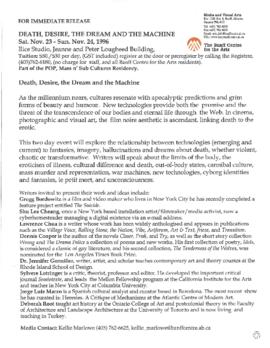 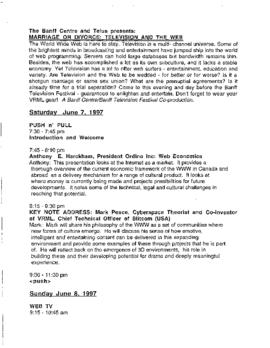 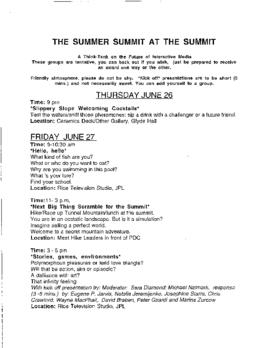 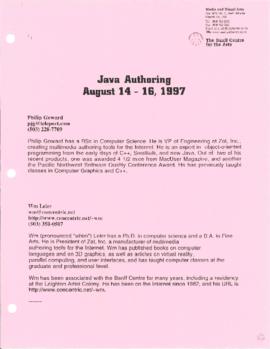 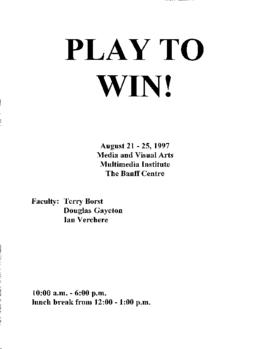 New media came into focus at Banff Centre for Arts in Creativity in the late 1980s. With the formal establishment of the Media Arts Department in 1988, under its Artistic Director, Michael Century, Banff Centre turned its attention to the exploration of the intersection between art, science, computing and technology in various projects. Examples of early new media work and research at Banff Centre included: 1989’s Hypermedia (a linked text/media exploration of Glenn Gould); The Virtual Seminar on the Bioapparatus (a ten week residency at the Centre in 1991, led by Catherine Richards and Neil Tenhaaf); Nomad Net (1993); and 4Cyberconf (1994). Many of these early projects were part of the Art and Virtual Environments project (1992-1994), spearhead by Douglas MacLeod, which aimed to explore virtual reality and artistic practices (and played a pioneering role in the production of many early virtual reality artworks, such as Lawrence Paul Yuxweluptun’s “Inherent Rights, Vision Rights”).

The conclusion of the Art and Virtual Environments project in 1994 (mainly as a result of a restraint in government spending, which reduced enthusiasm for expensive virtual reality projects), the recently established Media and Visual Arts Department at Banff Centre aimed to find a means to continue the conversation around new media. It did so through the establishment of the Banff New Media Institute (originally called the Banff Multimedia Institute). The BNMI, as it became known, under its founding Director/Executive Producer Sara Diamond facilitated summits, think-tanks. workshops and conferences on new media topics; such as Interactive Screen (held every year from 1995-2010), Producing New Media: Money and Law (1997-2005), and Women in the Director’s Chair (1996-2015).

Although the shift away from the production-focused Art and Virtual Environments project to the more conference-focused activity of the BNMI should be noted, the BNMI continued to play a pivotal role in the creation of new media works through its support of hundreds of co-productions; which included short films (such as "Herr" by John Greyson), an Internet gathering of Indigenous Artists (CyberPowWow 2k), and a pioneering new media publication ("Horizon Zero"), among countless other projects.

The BNMI also contributed to new media research, through various projects (most notably the Human Centred Interface Project, and Banff Centre’s participation in WestGrid and CANARIE). Sara Diamond, the Director of the BNMI, was eventually appointed as Banff Centre’s Director of Research. BNMI also explored supporting the business applications of new media research through various projects, such as the Accelerator program.

In 2005, the BNMI celebrated its 10th anniversary, with a series of events (including REFRESH! The First International Conference on the Histories of Media Art, Science and Technology and an exhibition at the Walter Phillips Gallery titled "The Art Formerly Known as New Media"). A significant transformative event in its 10th year was the departure of Director Sara Diamond, who went on to serve as President of OCAD-U.

Diamond was succeeded as the Director of the BNMI by Susan Kennard. Kennard, in a 2010 discussion with Sarah Cook, noted that she “was interesting in building the co-production model through the development of a new program of group thematic residencies” (Diamond and Cook, 2010, p. 979). This led to the establishment of Liminal Screen (2006-2010), Almost Perfect (2006-2010), and Reference Check (2007). This resulted in a shift away from the summit-culture of BNMI under Diamond, to the creation of a kind of “lab”, wherein artists and researchers came together for longer and more production-driven residencies.

When Susan Kennard left Banff Centre at the end of 2009, the BNMI continued its planned events under the BNMI banner in 2010 (such as Interactive Screen, Liminal Screen and Almost Perfect), but the Institute was wrapping up. Starting in 2011, the BNMI formally ceased to exist, and was replaced by a Digital Media Research program stream within the Film and Media Department (now called Film and New Media). Still, several programs established at Banff Centre during the BNMI days (notably Women in the Director’s Chair) continued for several years under the new structure.

The bulk of the BNMI archive was created by Lorna Marr during 2004-2005, the records she arranged and described where transferred to the Paul D. Fleck Library and Archives in 2017 (as accession number 2017-29), along with additional records (mainly documenting the 2005-2010 period of the BNMI).

Archives staff arranged and described the records between 2018-2019, adding additional material from Sara Diamond's office and the Media and Visual Arts record transfers as appropriate.

Fonds consists of material relating to the Banff New Media Institute (BNMI). The fonds is divided into four series, which represent the main activities of the BNMI: summits/conference activity, co-production, research, and general administrative records. The fonds includes many recordings of BNMI events, grant files, co-production agreements, marketing material, and other documents.

Fonds consists of many audio and video recordings which are in need of digitization.

In discussion with former BNMI staff, a decision was made to include Film and Media files transferred with BNMI materials which covered the period of 2011-2015 in this fonds. Although BNMI formally ceased to exist by 2011, many of these files relate to programs which started under BNMI (for example: "Women in the Director's Chair"), or made use of staff and resources of the former BNMI.

Some materials are restricted in accordance with privacy legislation. Please contact the Archives (archives@banffcentre.ca) regarding the status of the materials.

Given that BNMI was part of the Media and Visual Arts (MVA) department at Banff Centre, additional material related to the BNMI can be found in MVA files in the Archives; for instance, Sara Diamond's hard-drive (in RT 465), among many other documents. These materials could be integrated into the BNMI fonds, but the decision was made to keep them separate in order to document BNMI's existence within the wider MVA. Please contact the archives to explore these materials.

Only some items have been digitized. Please contact the Archives to explore the complete fonds.