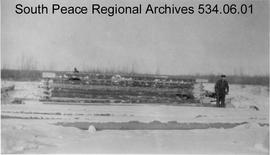 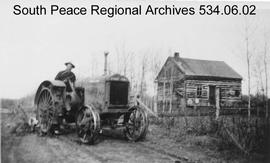 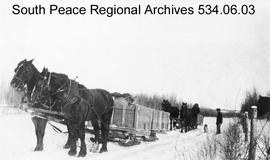 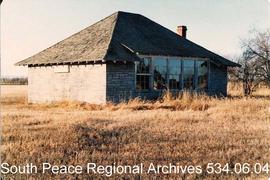 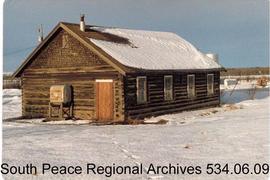 The Bay Tree Community Hall was constructed by volunteer labour on the N.E. ¼ 2-79-13 W6th in 1931. This was on land donated by John A. Svenson, a homesteader from Sweden, for $1.00 per year on a 20 year lease. By 1933 all was complete but the roof, which was cause for celebration, so the first dance was held, minus a roof. The lack of roof kept the attendees dancing to stay warm. The completed hall was 30 x 40’, and constructed of logs. The first wedding dance was held in 1934 for Emil and Alex Lehmann, and was the first of many events to be held at the hall, including dances, box socials, Christmas concerts and Halloween parties.

Once the hall was complete, the local residents decided there was a need for a committee to help with the upkeep and operations. The United Farmers of Alberta Branch No. 800 was created with this in mind. After they disbanded, the Bay Tree Community Hall Association was formed.

In 1955 a new lease was needed for the land the hall was situated on. In the meantime the land had changed hands, and Roland Rogers was the new owner. He also agreed to lease the land for the amount of $1.00. While negotiating for the lease, the Community Hall Association decided that purchasing the land, was in their best interest. On October 5, 1956, the Hall Association became land owners as well.

Many improvements were made to the hall. In 1957 the hall was re-shingled and electricity put in place by running a long extension cord from Nick Kulachkosky’s garage. By 1970 the extension cords were no longer needed as the hall had its own electricity. 1976 saw an end to the wood cutting bees that had been held to supply wood for heating the hall, as an oil furnace was purchased. In 1986 an addition was built on to the front of the hall.

Many people in the community had a hand in the building and maintaining of the hall. In the early years names mentioned included John A. Svenson, Otto and Emil Lehmann, J W Sutherland, and Albert Beck. Later records show D.J. Scott, Arthur Bourque, Ken and Bula McRann, Pat and Ray Lehmann, Barb and George Titford, Earl and Dee Newman, Ernie and Julie Scott, Richard and Ann Noll, John and Doris Clisby, Vivian and Denis Dechief, and Nick and Rose Kanda.

The Bay Tree Hall was a central place for the people of the area to gather and socialize. The hall is still standing at Range Road 131 and Township Road 791, commemorating the strong will and hard work of the early settlers.

The fonds consists of records relating to the operation of the hall and the meetings that were held in the running of the hall. There are minute books and list of memberships and executives; financial documents, deposit books and annual returns; receipts and documents pertaining to the running of the hall; the original lease agreement for the land the hall sits upon; and nine photographs of the Bay Tree community.
The fonds is arranged in six series based on record content: minutes, financial records, annual returns, land, hall operations and photographs. The arrangement has been set by the Archivist as for the most part the records were not in any set order.

A finding aid is available at http://southpeacearchives.org/finding-aids/fonds-534-bay-tree-community-hall/