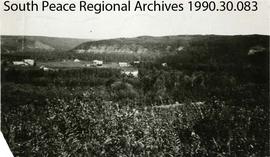 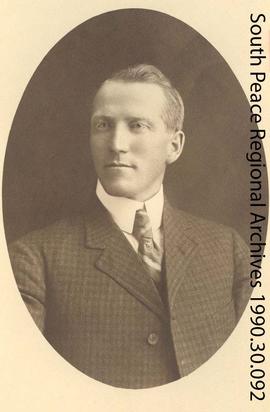 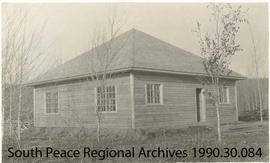 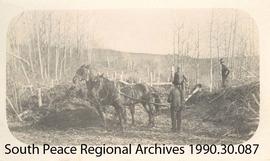 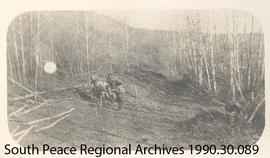 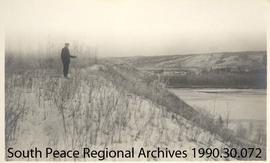 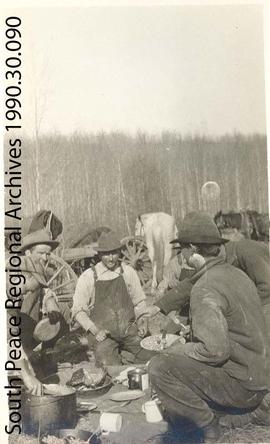 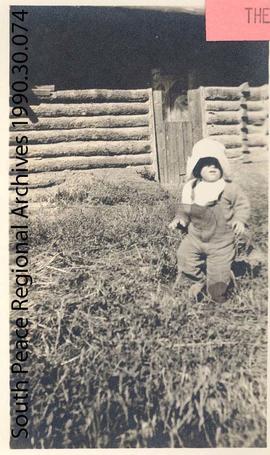 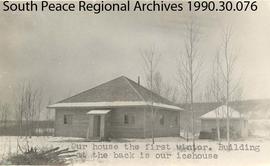 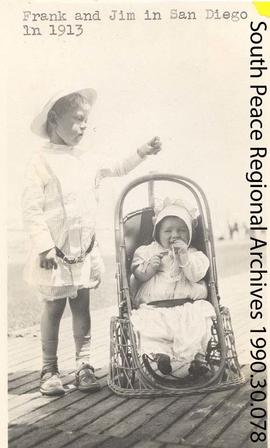 Ancel Maynard Bezanson, born near Halifax in 1878, began his love affair with the Peace Country in 1906. That year he traveled throughout the Peace with a camera and a notebook, and shortly thereafter published The Peace River Trails, which was a success. He was convinced of the agricultural potential of the area, and returned for a scouting trip in 1907, and again with his bride, Dorothy Robillard, in 1908. That winter, Dorothy died in childbirth, but her child (Frank) survived. In 1910, Bezanson married Dorothy's sister Lois and the couple returned to the Peace Country. The couple lost twin girls and had one more son who survived (Jim). The Bezanson Ranch was called Teepee Ranch, but Bezanson also kept herds of cattle at Saskatoon Lake. When the C.N.R. Survey came through Teepee Ranch in 1908, Bezanson began to promote a townsite "along the railway" on a bench above the Smoky River. In 1913, Bezanson drove the first car over the Edson Trail. Accompanying him was A.J. Davidson, a real estate dealer from Edmonton, who supported Bezanson's vision of a railroad and town. In 1914 Bezanson published "Looking Ahead in the Peace Country-Building of a City" with a detailed map of the Bezanson townsite. However, when the railroad finally came in 1916, it came to Grande Prairie. Bitterly disappointed, Bezanson left the area, returning to settle at Pouce Coupe in 1931. His sons Frank and Jim, with their families, continue to make their home in British Columbia. Ancel Maynard Bezanson died in Vancouver on September 2, 1959.

The first donation of photographs were brought to the Peace Country by the Bezanson Family at the time the Old Bezanson Townsite was declared a historical site ca. 1986. They were left in the care of Janet Sarmaga, who later deposited them with the Grande Prairie Museum. In 2000 the records were transferred to the Grande Prairie Regional Archives.

In 2003, an accrual was donated to Grande Prairie Regional Archives by Mack Prentiss, son of Marion Prentiss and Mary Sheer. These photographs had been preserved by a cousin in Seattle who ran a rooming house. When an old man there died, she was asked to forward anything of value to his next of kin, and destroy the rest. She found the Bezanson pictures, and since they referred to Grande Prairie, she sent them to her cousin Mack Prentiss. They were copied by both the Daily Herald Tribune and the Provincial Archives of Alberta, but the originals were donated to this Archives in 2003.

The fonds consists of a collection of photographs donated by the Bezanson family when the Bezanson Towsite became an historical site ca. 1986; and a collection found in a Seattle rooming house in the 1970s. There is some duplication in the collection. They include photographs of Bezanson’s first trip into the Peace Country in 1906, their homestead on the Smoky River from 1908-1913, his 1913 trip over the Edson Trail in a 1912 Cadillac with an Edmonton Realtor named Davidson, the creation of the hamlet of Bezanson at the junction of the Smoky and Simonette Rivers, and a collection of Peace Country scenes dating from 1910 to 1930.

A finding aid is available at http://southpeacearchives.org/bezanson-family-fonds/