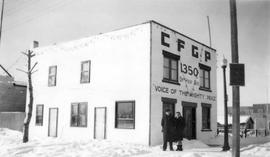 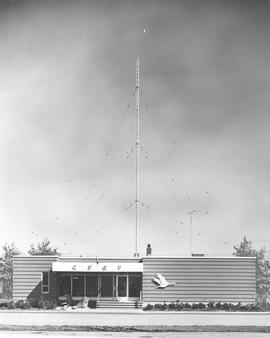 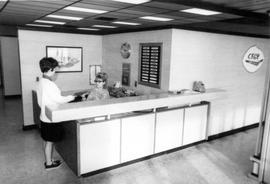 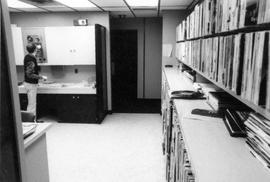 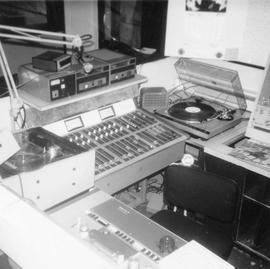 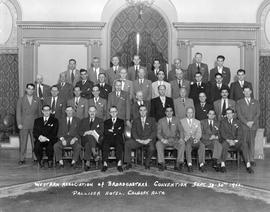 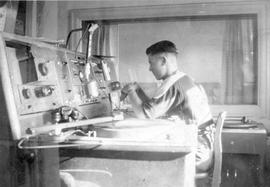 CFGP was established in 1937, the first radio station north of Edmonton and the most northerly station in the British Empire at the time. It was owned by the Northern Broadcasting Corporation Ltd., and shares were sold to local people and businessmen at $200 each. Taylor, Pearson and Carson, from Edmonton, owned the largest number of shares as well heavy investments in many other radio stations throughout Alberta. The station went on the air with 100 watts of power on November 2, 1937, on channel 1200. Howard Brooker was the first manager, followed by Mr. Cecil Berry as President and Manager, assisted by Miss Margaret Moon as secretary, Bert Churchill as music director, George Sinclair as chief engineer, and Paul Guy as Announcer. Operating hours were from 8 a.m. to 1 p.m. and from 4 to 10 p.m. This was during the depths of the Depression, and public service broadcasting was the key, creating a communications role for CFGP within the community--not just weather and announcements, but sending greetings to friends, school broadcasts for curriculum enhancement, church services for the shut-ins, radio dances to raise money for causes such as building the Monkman Pass Highway, Armed Forces radio service shows for U.S. and Canadian army personnel, emergency evacuation and communications for disasters such as forest fires. They used local talent in programming--Mel Rodacker's "Oldtimers" played regularly on radio during the 1940s and 50s; locally produced radio plays were aired in cooperation with Little Theatre. Free advertising was given to many community causes: Victory Loans, the Kinsmen's Milk for Britain campaign, the construction of the Curling Rink, improvements on the Memorial Arena, the development of Bear Creek Park, . Today, CFGP still promotes many community events such as Stompede, Golf Classics, Fairs, Rodeos and Provincial/National Competitions. They offer community service announcements to non-profit clubs and organizations free of charge. But it was not just in communications that CFGP contributed to its broadcast area. In 1939, they sent 250 children to Edmonton to see the King and Queen; in 1940 they assisted the National Film Board in filming Peace River, a promotional film for the Peace River area of Alberta and British Columbia; in 1941 they started a regular program to raise funds for the needy at Christmas; and at war's end organized and funded Welcome and Welfare Committees throughout the Peace to welcome home returned soldiers. In 1944, the editor of MacLeans Magazine described CFGP as "Canada's most community minded station." The station also brought celebrities to Grande Prairie: the Edmonton Flyers Hockey Team in 1960,;Off-site broadcasting drew thousands of people to events such as the Opening of the Smoky Bridge, the Dunvegan Bridge, and the Whitecourt Cut-off, and started a tradition for "on location radio" which continues today. Sometimes the occasion was a disaster instead of a celebration and thousands of dollars were raised through CFGP coverage on disasters such as the Kinuso Forest Fire in 1944, and the Canyon Creek fire in 1945, when Jack Soars broadcast on location from the site of the fire. News was always an important aspect of programming--starting with the first announcer, who simply read the news from the previous day's Edmonton Bulletin. In 1940 they began to receive "ticker tape" news which they got directly from the radio transmitter. Also, during the 1940s, the newsman monitored the CBC network and re-wrote the items. In 1956, the first News Editor, Mrs. Charters, was appointed so news features;Early schedules were daytime programs that quickly extended into evenings. Other innovations in programming included "Open Line" in 1958;CFGP started with its own building and transmitters on the rise of land just north of town, but quickly realized they needed to be more accessible. In January 1938, they moved to offices in the Donald Hotel, and in 1941 to their own building on 99th Street and Richmond Ave. The station increased in staff and broadcast area. By 1944, there were nine staff and 1,000 watts of power, in the early 50s they went to 5,000 watts, and by 1956 the signal strength was 10,000 watts. In 1964, a new building was constructed on 103 Avenue and four years later CFGP went to 24 hour programming. Management at CFGP after a short stint by Howard Brooker: Cecil Berry 1938-1945; Art Balfour 1945-1958; Cam Perry 1958-1968; Walter Everitt from 1968-1978. In 1978, Gordon Pearcy, who began his broadcast career with CFGP in 1943, took over as manager and VP of Northern Broadcasting Ltd. until 1990. CFGP was purchased by the Selkirk Chain c. 1980, and in 1986 introduced AM-Stereo. The next year, 1987, was the station's 50th Anniversary, and they celebrated in a big way. Their new home in Windsor Court was officially opened on by the Duke and Duchess of York, Andrew and Sarah. In 1997 the radio station began airing on FM, changing its name to SUN FM.

Records were collected by Gordon Pearcy and stored at SUN FM, who donated them to the Grande Prairie Regional Archives in 2003, and 2013. An accrual in 2013 was donated by Gord Pearcy.

A finding aid is located at http://southpeacearchives.org/cfgp-radio-fonds/