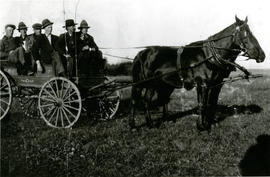 Charles E. Spencer was born in England, in the old County of Westmorland (now part of Cumbria) in 1869. The 1901 British Census shows Charles in Southampton, where he boarded on Pear Tree Green and worked as a 'builder and joiner". Four years later, at the age of 37, he emigrated to Canada. His first residence was in Moose Jaw, where he filed on a homestead, but by 1909 he was living in Edmonton. There he became a partner in the Argonaut Company, and after they established the townsite of Grande Prairie City in 1910, he became a permanent resident here. The Argonaut Co. Ltd., composed of a group of Edmonton businessmen, was established in 1909 at the encouragement of W.A. Rae. In 1908, Rae had made a trip to the grande prairie with his wife and son, and was impressed with the agricultural and commercial potential of the area. He sold the idea of developing a townsite on Bear Creek. The group opened their headquarters on Jasper Avenue in Edmonton, and in 1909 purchased 80 acres of land along the CNR Railway Survey. The named the townsite "Grande Prairie City" and soon a banner proclaiming the new townsite draped their office on Jasper Avenue. As a partner in the Argonauts, Mr. Spencer was one of Grande Prairie's first real estate agents. He bought and sold land, and rented out a series of "cottages" as well as an office block . He also formed a partnership with Neil Campbell, another Argonaut, and once again was in the building trade. Charles Spencer designed and/or built many of our early public buildings: the first school in 1915; the large brick Montrose School in 1917, which he designed and supervised without pay; the Grande Prairie Hotel in 1917; the Spencer Block, a complex of offices and suites, in 1919; the first Town Hall, which also included the Fire Hall, in 1920; the new Grande Prairie High School in 1929; and the Donald Hotel in 1937. When the building trade slowed during the 30's, he traveled around the south Peace building stockyards and loading platforms for the Grande Prairie Cooperative Livestock Association. It was out of the Spencer Block that Mr. Spencer operated "Prairie City Agency" which sold all lines of fire insurance. In 1936, Miss Ann Philips Roberts, a new graduate of the Grande Prairie Business College, was in charge. An earlier business was the Grande Prairie Electric Light Co. which he encouraged the ratepayers of the town to establish in 1917. They formed a company and sold shares, providing electrical service to the town until Canadian Utilities took over the franchise in 1929. Besides being a partner in the Argonaut Company and a builder, Charles pursued a number of other interests. As early as 1917, he opened a lending library in the Donald Hotel, cooperating with the Extension Department at the University of Alberta to provide the best possible reading material. Although this library was not in operation long, Spencer continued to promote the need for a public library and was instrumental in forming the first Library Board. He also continued to build his own collection, which was reputed to be one of the most complete in the north. In 1952 he donated his own private collection of 2500 books to the library. They were personally catalogued by the Supervisor of Public Libraries for all of Alberta, who stated that some of the books were of a quality that universities would be proud to have. The list of public offices Mr. Spencer held included founding member of the Board of Trade, member of the Hospital Board; Chairman and/or Secretary-Treasurer of the Grande Prairie School Distict 2357, Justice of the Peace, Commissioner of the Juvenile Court. In 1934, when he was re-elected to Town Council, he had already served several terms. It was in this capacity that he preserved the Town files, in effect starting one of the first Archival collections. Not content to stay and do what he could inside the Peace Country, Charles also made trips to Vancouver and Seattle to promote a coastal outlet for products from the Peace River Country. He also made several trips back to England visiting family, but he always returned to the Peace Country. "It does a man good to get away for a while, for the reason that one is then more satisfied with the Peace River..." he commented in 1937. Mr. Spencer remained in the Peace Country until he died on February 18, 1952, at the Grande Prairie Municipal Hospital after a lengthy illness. As a mark of respect, all stores in the town closed for his funeral. He was buried in the Grande Prairie Cemetery. The Spencer Block was purchased by the Army and Navy Department Store out of Edmonton, and the building razed. In 1955, a modern new store, Macleods was built on the site."

The records were donated to the Grande Prairie Public Library with his book collection in 1952. In 2008, GPPL passed them on to South Peace Regional Archives.

An accrual to the fonds of 2 photographs of Charles Spencer was donated by GPPL on October 15, 2013.

An accrual to the fonds of 23 images (21 photographs and 9 negatives) was donated by the GPPL to SPRA on October 22, 2013. Prior to this, the images had been housed by the library with the Isabel Campbell collection, in a file labelled "Charles Spencer Collection". Charles Spencer presumably collected them from a number of sources.

The fonds consists of various textual records related to Charles Spencer’s personal, business and commercial interests. The contents of the fonds deal primarily with his life and interests after moving to Grande Prairie in 1910, although the material dates from 1886 to 1941. Records include correspondence, notebooks, daily journals, receipts, contracts and agreements, sales and account books, share certificates, photographs and postcards. There are also two blueprints of the 1917 Montrose School which he designed.

The fonds is arranged in three series: Personal papers, Business papers and Photographs.

An order has been established by the processing archivist as original order had been disrupted.

The records were donated to the Grande Prairie Public Library with his book collection in 1952. In 2008, GPPL passed them on to South Peace Regional Archives.

An accrual to the fonds of 2 photographs of Charles Spencer was donated by GPPL on October 15, 2013.

A finding aid is available at http://southpeacearchives.org/finding-aids/charles-spencer-fonds/