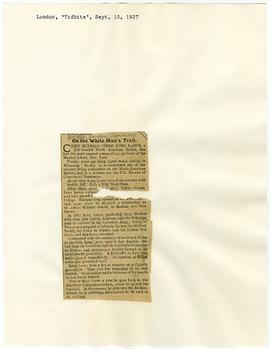 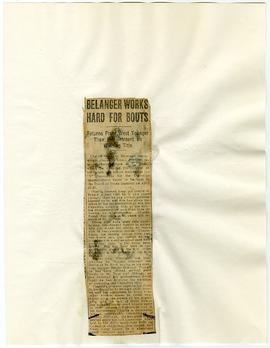 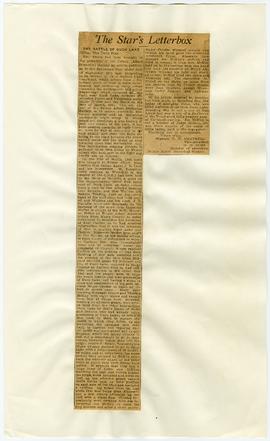 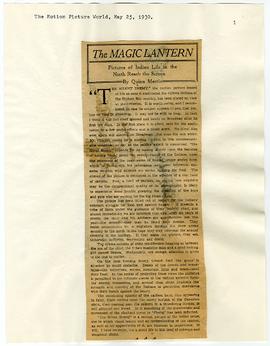 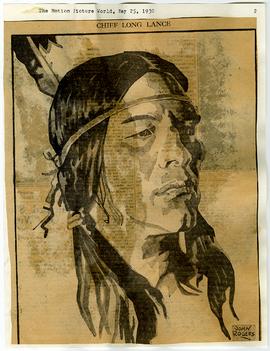 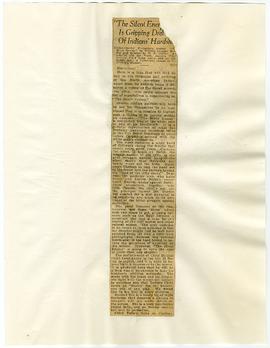 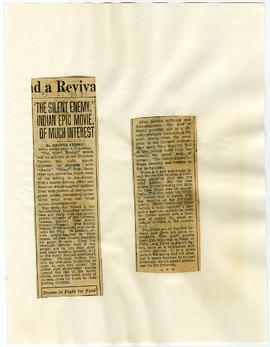 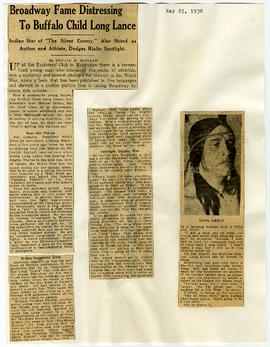 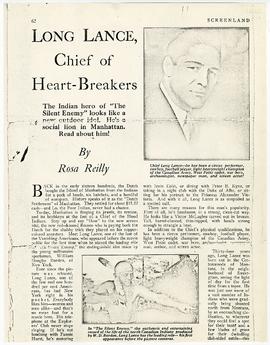 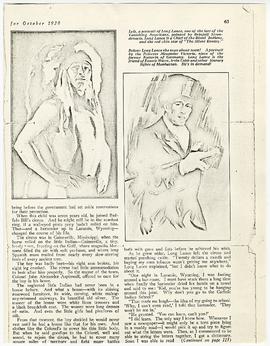 Long Lance, 1890-1932, was born Sylvester Clark Long in North Carolina, USA. His parents were of mixed white, native and possibly black ancestry. He attended Carlisle Indian Residential School, 1909-1912, claiming to be half Cherokee, and graduated with honours. He attended St. John's and Manlius Military Academies, graduating in 1915. He came to Canada, joined the Canadian Expeditionary Force and fought overseas during First World War. He returned to Calgary, Alberta and was employed as a reporter for the Calgary Herald for nearly three years. He was fired after throwing a fake bomb into a City Council meeting in 1922. He continued freelance writing through the 1920s. In 1922 he was adopted by the Bloods and given the name Buffalo Child. From 1923 on he presented himself as a Blood. His autobiography, Long Lance, describing himself as a Plains Indian, was published in 1928. In 1929 he starred in the film Silent Enemy. He was found dead with a bullet in his head in California in 1932. For further information see Long Lance : The True Story of an Imposter / Donald B. Smith. -- Toronto : Macmillan, 1982; "Long Lance Papers" Glenbow [magazine], vol.1, no. 6 (December 1968), p. 6-7; and Donald B. Smith' entry, "Sylvester Clark Long", in the Dictionary of Canadian Biography at www.biographi.ca.

Most of Long Lance's papers were willed to his friend, Canon S.H. Middleton. They were acquired, along with the Middleton papers, by J. Zieffle, a Pincher Creek dealer, who sold the papers to Glenbow in 1968.

The fonds consists of correspondence; newspaper and magazine articles by Long Lance; draft articles and manuscripts; scrapbooks; passes and invitations; notebook kept during interviews with parents of Almighty Voice; photographs of Long Lance, the filming of Silent Enemy, his family, and native people; and slides used by Long Lance in lectures. Includes x-rays of his spine.

The scrapbook (M-6240) is also available on microfilm.

Copies of Long Lance personal and family papers from private sources are in the Donald B. Smith fonds at Glenbow.