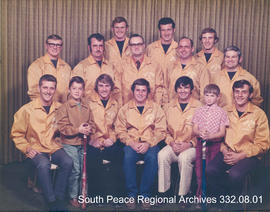 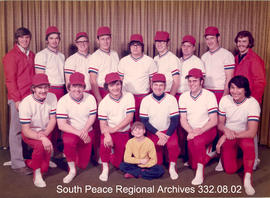 In the late 1940s, it was clear that a new hotel was needed in the growing town of Grande Prairie. Of the six hotels in the town, four had been built before 1920, when it was still a village, and the newest one had been built before the war in 1937. Now, with the post war building boom beginning, a new hotel was badly needed. At the time, the Alberta Liquor Control Board strictly regulated all aspects of ownership, construction and operation of hotels, and licenses were hard to acquire; so in December 1946, City Hotels Ltd. Edmonton bought the old Grande Prairie Hotel for its license, and then purchased three lots on the corner of 101 Street and 101 Avenue from the Masonic Lodge. Construction began in the spring of 1948, and the liquor license was transferred to the new Hotel York. The attractive two-storey building of brick and stucco opened November 8, 1948, and was described in the media as "the newest and probably the finest hotel north of Edmonton". "Upstairs there are 23 rooms, all with running water, many with a private bath. All rooms have wall-to-wall carpets and hallways are carpeted. Each room is individually furnished in soft, harmonizing colours, with natural colour furniture as a background. All rooms have been wired for telephone, but are not as yet connected due to inability to obtain a switchboard at present." The services in the hotel included the York Café (a lunch counter and soda fountain), a newstand, a dining room, two beverage rooms, and downstairs a state of the art laundry, boiler room and banquet room. "E.H. (Elmer) Logan, of Edmonton, has arrived to take charge of the hotel," the newspaper article continued. "Mr. Logan is a graduate in Arts and Law from the University of Alberta, 1937." Elmer had been a partner in a law firm besides being assistant crown prosecutor in the Edmonton police courts. He went on to become a civic leader and booster, as well as a prominent local lawyer. He was instrumental in the Grande Prairie Airport runways being rebuilt to handle heavy aircraft, and later served a term as town councillor. When Elmer Logan died in April, 1980, his son Merritt was in place to take over the reins, but he also passed away that year in December, and it was Dwight Logan who became the new manager of the York. Dwight also continued in the family tradition of civic leadership and during his tenure as hotel manager, served two terms as Mayor of the City of Grande Prairie. To accommodate growth and changing times, there were many renovations at the York: a 16 room addition in 1953, and in 1955 a second addition with 24 more rooms and a larger restaurant. In 1958, the tavern had to be sectioned to provide for "Ladies and Escorts" and soon after, the Pioneer Lounge & Dining Room opened. In 1968, the York's banquet room, which was a meeting place for many local organizations such as the JayCees, Rotarians, Kinsmen, the 54 Club, and Associated Canadian Travelers, was renovated and became the York Cabaret. When the ALCB revoked all cabaret licenses in 1981, the York opened Homesteaders, which operated as a quiet bar. The ALCB advised licensees across the province to follow the York's lead. Finally in 1993, the Beer Box was added to the west side of the hotel when liquor sales were privatized. The constant adaptations allowed the York to continue to operate during the recession in the early 80s, when interest rates began to soar and many Alberta Hotels went into receivership. In 1998, the Hotel York owners, staff and patrons celebrated their 50th Anniversary as "Grande Prairie's Hospitality Centre". For 50 years the hotel had been owned by one company and managed by one family. But the age of the hotel and changes in the City meant it no longer had the status it once had. In 2006 the Hotel was sold to new owners.

The records were donated to the South Peace Regional Archives by Dwight Logan, manager and owner of the York Hotel, in 2006.

The fonds consists of a research file on the history of the York Hotel; the original ledger from the Edmonton Hub Hotel which purchased the old Grande Prairie Hotel for its liquor license, and subsequent financial records for the City Hotel Co. Ltd. until 1987; menus from a variety of food and bar services which operated within the hotel; inspection reports; promotional material; correspondence and contracts relating to operations; a payroll ledger and some miscellaneous employee records; and documentation showing the interaction between the York Hotel and the community of Grande Prairie.

The records were donated to the South Peace Regional Archives by Dwight Logan, manager and owner of the York Hotel, in 2006.

A finding aid is available at http://southpeacearchives.org/city-hotel-co-ltd-york-hotel/