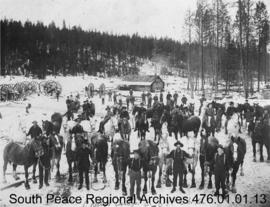 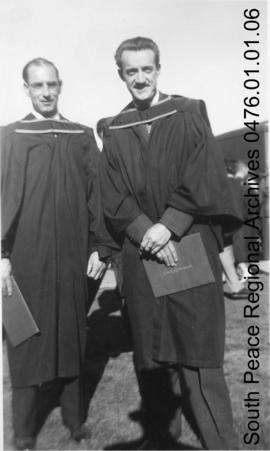 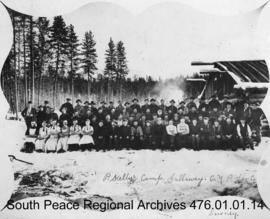 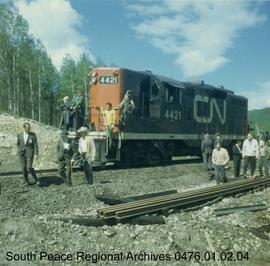 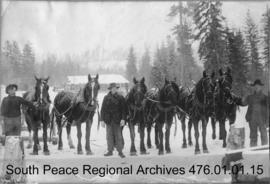 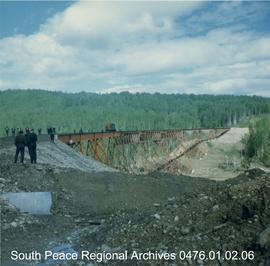 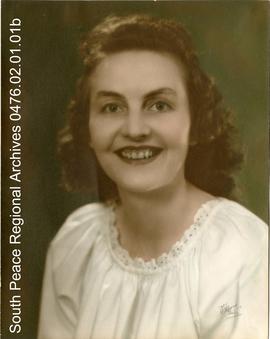 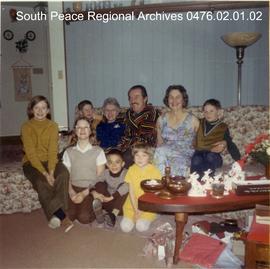 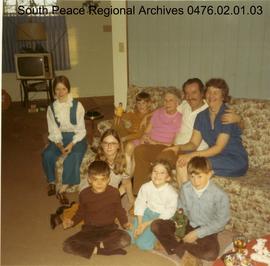 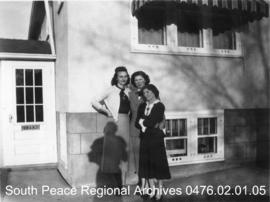 Clem Collin's father, Alfred Collins, had come to Canada before WW1 and after arriving in Montreal and taking the train to Edmonton, he walked to the early settlement of Spirit River. He enlisted in the Canadian Army in 1915, and during the war married Emily Hiam from London. He brought his bride and their daughter, Betty, back after the war. Clem Collins was born in Spirit River Nov. 16, 1920. The family moved to Westlock when Clem was three and he grew up there, dropped out of high school and enlisted in the Royal Canadian Air Force when WWII began. After the war he went to University of British Columbia and earned a Bachelor of Commerce Degree. During a summer job doing a project for the Department of Health, he met Muriel Peets who was assistant manager in an Eaton's store in Edmonton. Muriel Peets was born to Harry and Thelma Peets who were married in 1917 in Killam, Alberta. Her grandparents were Edward and Florence Peets. Thelma passed away March 4, 1976, age 77 in Penticton. Harry died Jan 19, 1949, age 59 at Penticton. Muriel grew up in Penticton and after she moved away from home corresponded with her young nieces and nephews. When Clem graduated in 1950, he moved to Edmonton where he and Muriel were married. In 1951, Clem joined a firm of accountants in Grande Prairie and promised Muriel their stay in Grande Prairie would only be for three years. But, in 1961, the couple had a home built on a corner lot on the outskirts of town (100 St and 88 Ave.) and they lived there for the rest of their lives. They had no children of their own but two of Muriel's nephews lived with them in their growing up years. Clem's accounting business grew and he and partner, J.H. Bennion were joined by Marcel Joberty and by the late 1970s their staff numbered over fifty. Clem became very involved in community organizations, including the Grande Prairie Chamber of Commerce (1975-76 as President of the Alberta Chamber of Commerce), Grande Prairie Regional College, the Progressive Conservative Assoc., Grande Prairie Museum, and the Boy Scouts. Muriel was equally involved, serving in the arts and cultural organizations such as the Grande Prairie Music Festival. She served on Grande Prairie City Council, and Grande Prairie Regional College Board of Govenors, and was a member of the Beta Sigma Phi. Both Clem and Muriel were supporters of the QEII Foundation, the Grande Prairie Museum and both created the Muriel and Clem Collins' Writing Contest for the Grande Prairie Public Library. Muriel died in 2004 and Clem died in 2008.

The records were donated to the South Peace Regional Archives by Mike Frey, executor for the Clem and Muriel Collins estate.

The records were donated to the South Peace Regional Archives by Mike Frey, executor for the Clem and Muriel Collins estate.

A finding aid is available at http://southpeacearchives.org/clem-and-muriel-collins-fonds/