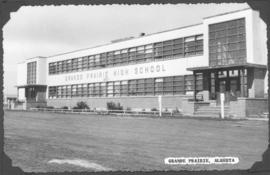 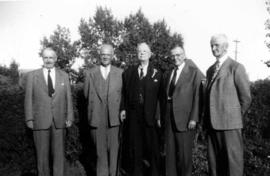 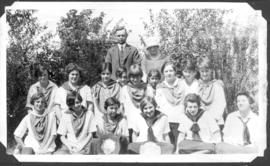 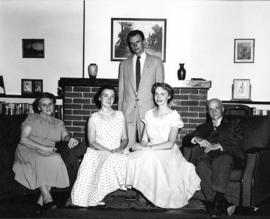 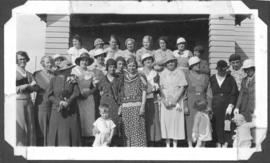 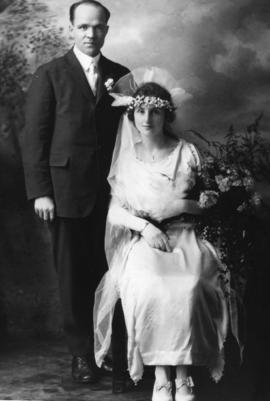 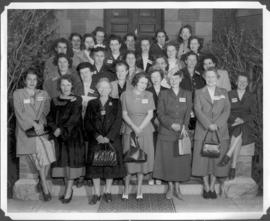 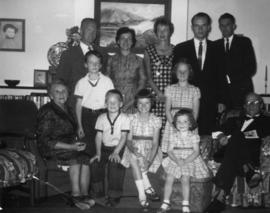 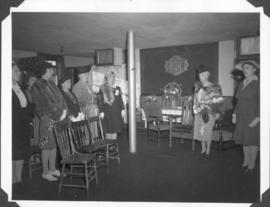 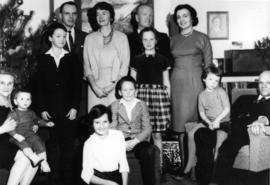 D. W. Patterson was born March 20, 1888, to Eliza and Donald Patterson, Huron County, Ontario, and was brother to Florence, Rena, Lillian, Ella May, Fern, Laurence, Roy, David, and Peter. He attended Goderich Collegiate at age fourteen. At sixteen he passed the required Provincial Examinations required to apply for admission to a Normal School but eighteen was the required age in Ontario. His mother learned he could be admitted to Regina Normal School , North West Territories, so after a 2-3 day train trip and finding a boarding place to fit his budget, he began teacher training in Jan. 1905. At the end of April, he was granted a certificate that entitled him to teach in the North West Territories and went to teach in Long Creek School near Rouleau. When his first term was over, he boarded a train for Nanton, Alberta, where he teamed up with his brother Laurence and filed on a homestead, engaging a neighbor to do the required fifteen acres of breaking. In the spring of 1907, Donald decided to go live on his homestead and teach in the Harvard School where he stayed to prove up his homestead in 1909. He had always wanted to be a lawyer and after interviewing several in Lethbridge arranged to article with John J. Cameron. In 1910 the articles of a Student-at-Law were signed and a $50 fee remitted to the Law Society; texts were acquired and studied while he worked in the law office during the day. One year later when he applied to try the examinations he found his $50 had never reached the law society. He had been cheated out of a year and $50. He then articled under Mr. Smith who proved unsuitable, then under Mr. Ritchie, who gave him work with the Clerk’s office and the Sheriff. He experienced practicing law but felt he lacked the polish and poise a university training would have given him. He received his Bachelor of Law’s Certificate from the University of Alberta in 1914. When WW1 broke out the same fall, he was not inclined to enlist – he had just started his legal profession and his mother had taught him war was “silly”. However, in 1915, he tok a Non-Commissioned Officer’s course, eventually joined the 39th Battery Canadian Field Artillery and was sent to England and then to France where he fought at Dead Dog Farm and the Somme, the “Valley of Sorrow”, and was wounded in battle at Vimy Ridge in 1917. He spent time recovering in English hospitals and then reurned to his 39th Battery as gunner. In September, 1917, his unit battled at Paschendale for 28 days straight. Later that fall he applied for a commission and after a miserable winter fighting in France, was off to England in June to study Military Law. In January, 1919, he returned to Lethbridge and in Calgary, met a lawyer, Mr. MacPhee, from Grande Prairie, who offered him a partnership. By the end 1922 D.W. was the town’s mayor and had met and married Rose Devlin, a teacher from Nanaimo who had spent time teaching in Grande Prairie.

D.W. Patterson came to Grande Prairie to practice law in 1919. He was Mayor of Grande Prairie from 1921-1923 and during that time he married Rose Devlin. The following November, their first daughter, Rhoda was born in hospital, Dr. O'Brien assisting. In 1925, Donald became secretary of the Bear Lake Municipality and left McPhee and Patterson to set up his own law practice. In 1926, a second daughter, Dorothy was born. In 1933, George, Donald's nephew came to work with Donald and became part of the family for almost nine years. A third child, Donald Edward was born in 1935 and in 1937 the family moved to the bigger two-storey house on the creek bank.

Rose, born in 1893, was the eldest of five children born to Edward and Maria Devlin of Nanaimo. Her father was a miner and she has many fond childhood memories of school days and summer family camping trips. Books, music, church, celebrations with friends and family all provided more memories. Rose attended Normal School in Vancouver from 1911-1912 and began her teaching career in South Wellington and then Harewood School. Rose has vivid memories of the flu epidemic of 1918, schools closed and teachers recruited for helping in hospitals. Most of the family were stricken, but chidren fared better and had to take shifts looking after the family store wih their mother. In 1919, she accompanied her friend, Laura Davis, on a trip to Beaverlodge where Laura’s sister’s family, the Fred Dixon’s, lived. She spent a wonderful summer and when a teaching offer came for the fall, she took it. In the year that followed she met Donald Patterson and also made friends with Isabel Henderson who had arrived from Nova Scotia. She continued to teach at Montrose School but resigned in June, 1921, to go home and help her mother who was running a dress making business in the family store. In Dec 1922, a telegram from Donald Patterson soon led to their wedding and their return to Grande Prairie. On arriving in Grande Prairie, they were presented with a silver tea service from the townspeople. Rose became very active in the Ladies Aid and Women’s Missionary Society, and a leader of C.G.I.T. Rose was a charter member of the Women’s Institute and was involved in formalities for two official visits. In 1933, Lord and Lady Bessborough toured the Peace country and stopped in Grande Prairie for a reception. In 1943, the Duke of Athlone and Princess Alice (patron of Women’s Institutes) visited. H.R.H. had requested an exhibit including “bottling” so samples of war service work, quilts and canned produce were gathered from the whole region. After a trip to the Beaverlodge Experimental farm, the royals were met by a Majorette Guard of Honor, followed by a reception with formal receiving line held in the St. Paul’s Church. The Pattersons were also involved in the Canadian Club which invited speakers like Sheila McKay (writer for Chatelaine) to address rheir meetings. They entertained and hosted many visitors. In 1930 they took a two-week pack-horse trip with Dr. and Mrs. L.J. O’Brien to Cutbank River and Musreau Lake area, and in 1938 another wilderness trip took them to Kinuso Falls and the Monkman Pass area. Rose also contributed to a talk show over CFGP, the Monkman Pass talk show first and then a public service program for the Grande Prairie W. I. which lasted 25 years. In 1957, the Pattersons travelled through Europe for five months; in 1959 they travelled to Whitehorse and continued taking yearly trips.

The records were donated by Hazel Patterson starting in 2003, by Dorothy Hall in 2004 and by Gerry Roessler in 2010.

The fonds consist of D.W. Patterson’s memoirs,1956, (original and a copy) and a short story, Rose Patterson’s memoirs, Dorothy Hall’s personal record, the document admitting D.W. Patterson to the Law Society of Alberta, 1914, a program for the visit of the Earl of Bessborough in 1933, newsclippings concerning the death of Judge Sissons and appointment of Donald as Assistant Chief Judge, 4 portraits, a Women's Institute album of photographs, and several scanned copies of family photos, and miscellaneous papers and letters.

The records were donated by Hazel Patterson starting in 2003, by Dorothy Hall in 2004 and by Gerry Roessler in 2010.

A finding aid is available at http://southpeacearchives.org/d-w-patterson-family-fonds/