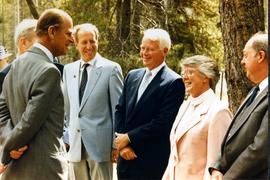 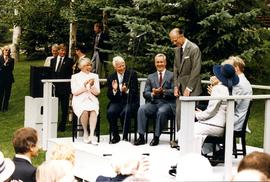 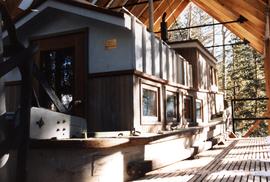 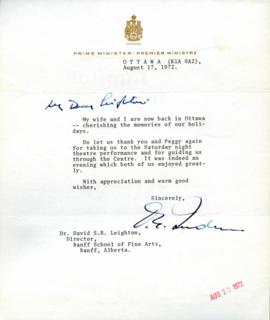 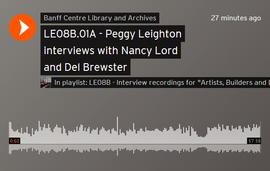 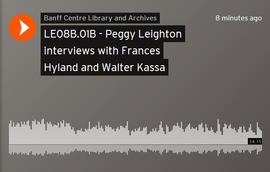 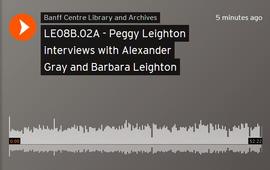 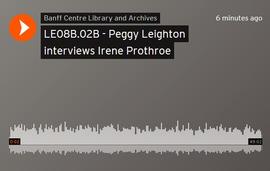 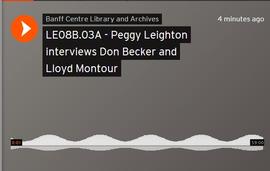 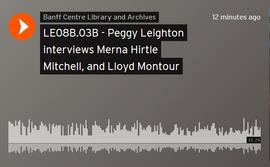 David Leighton was appointed President of the Banff Centre in 1970 and remained so until 1982. He and wife Peggy came to the Centre from Ontario, and immersed themselves in all events and aspects of the school, from gallery openings to car rallies. They actively participated in a range of extra-curricular activities involving members of the staff, faculty and students, many of whom they knew personally.

Peggy Leighton was born in Guelph, Ontario. She obtained her Bachelor of Arts and Bachelor of Physical Education from Queen’s University. During David’s presidency, Peggy generally acted as hostess to the many guests of the Banff Centre. In addition, she was responsible for the organization of the student services division, her efforts contributing to the development of many of the services offered today. Within the larger Banff community, Peggy played a leading role in establishing the town's Recreation Master Plan and was an original member of Preventative Social Services. For the 50th Anniversary of the Banff Centre, Peggy researched and documented the history of the Centre for the publication of the book “Artists, Builders and Dreamers: 50 years at the Banff School” in 1982.

David Leighton was born in Regina, Saskatchewan on February 20, 1928. He received his Bachelor of Arts from Queen’s University and both his Master and Doctor of Business Administration from Harvard University. During David’s presidency, the Banff Centre became a fully independent post-secondary institution. A number of key programming decisions also took place during his time at the Centre. Cultural Resources Management programs were introduced, and the School of Management grew to house many new programs, ranging from health administration to the environment to The Facility for Computer Assisted Management. Leighton also oversaw the establishment of the Banff International Television Festival, and the Banff Festival of Mountain Films. The overall focus of arts programming was shifted towards more advanced artists, and an audition/adjudication process was introduced for most programs. An artist colony was planned and initiated during the Leighton's tenure, and though he stepped down before it was officially opened, the Leighton Artist Studios was named in their honour.

Materials were donated on various occasions by David and Peggy Leighton.

Fonds consists of correspondence, photographs, clippings, books, and various memorabilia relating to the Leighton's years at the Banff Centre.