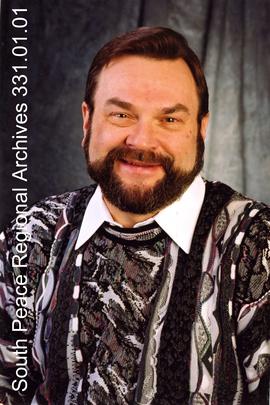 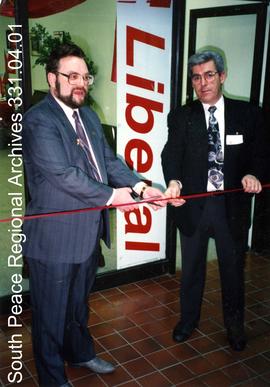 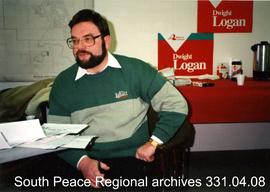 Dwight Logan was born in Edmonton, but moved to Grande Prairie at the age of 10 months. He was the son of Grace and Elmer Logan, who arrived in Grande Prairie in 1948 to manage the new York Hotel. Dwight graduated from Grande Prairie Composite High School and went on to obtain a Bachelor of Arts degree in History and English and a Professional Teaching Certificate from the University of Alberta. From 1970 to 1972 he taught at Montrose Junior High School in Grande Prairie, and in 1972 joined CUSO (Canadian University Service Overseas) and was posted to Mponela, Malawi for two years. From there he went to Regina, Saskatchewan to teach adult education classes for the Regina Committee for World Development, but in 1978 he returned to Africa. He led Canada World Youth Group on a Tanzanian-Canadian exchange program in 1978, and then taught adult education in Lusaka, Zambia with the Credit Union Zambia Association from 1979-1980. In 1980, both his father Elmer and his brother Merril died. At that time, he returned to Grande Prairie to take over the management of the family business, the York Hotel. Mr. Logan was first elected to Grande Prairie City Council as an alderman in 1983. He served on two standing committees--the general government services committtee and the public works committee--and as a member of the Municipal Police Commission, the Development Appeal Board, and the Economic Development Commission, of which he was chairman. In that one term ofalderman, Mr. Logan saw a need for stronger leadership in the mayor's chair, and in September 1986 threw his hat into the mayor's ring. In an economy still affected by the slump in world energy prices, the central issue was the city's high capital debt of close to $60 million, and the resulting rise in taxes and reduced services. Dwight put forward a four-part platform to reduce the debt and put the City on a more secure financial footing, and on election day, October 20, won by a landslide. Under Mayor Logan's leadership, the budget was brought under control after stormy consultation with the public; a no-smoking by-law was introduced but not passed; an environmentally safe landfill site was opened; the old liquor store was re-designed to become the new library; Muskoseepi Park was completed; and the City lobbied for and received the Northern Tax Allowance. They also made a comprehensive inventory of all the land owned by the City, but it was not until afer Dwight won a second land-slide in 1989, that he achieved a major goal by selling the downtown land left vacant by the removal of grain elevators, railway tracks and their accompanying industrial businesses. Development began with the Bowes Family Crystal Gardens Centre. Then they made a successful bid for the 1995 Winter Games. Also during Mr. Logan's tenure, was the Royal Visit of Prince Andrew and Sarah Ferguson in 1987, and the visit by the Mulroney family in 1988 to open Muskoseepi Park. After serving two terms as Mayor, Mr. Logan did not run in the 1992 Municipal Election. He had achieved the goals he had made when he took the mayor's chair, and was now interested in helping the Liberal cause in provincial politics. When incumbent Bob Elliot resigned in 1992, Dwight was the successful Liberal candidate for the Grande Prairie-Wapiti Constituency, and in January 1993 opened the first Liberal Constituency office in Grande Prairie. The major issues were the environment and equality. Although Logan won 17 of the 23 polling stations in the City, the Conservative candidate Wayne Jacques won on the strength of the rural vote with a margin of 500 votes. Although no longer in political life, Dwight continued to involve himself in the community. In 1992-93 he hosted an interview show on Radio CJXX; from 1994-1996 he co-chaired or chaired the United Way Campaigns; and from 1996-2001, he co-produced and hosted "In Their Own Words", an interview show on Northern Cablevision. In 1998, he returned to municipal politics as an alderman, and in 2001, again ran for mayor, but was defeated by Wayne Ayling. The next election (2004) saw him take an alderman's chair once again, and in 2007 he defeated Wayne Ayling for the position of Mayor of Grande Prairie. As part of his electoral duties Mr. Logan served on the following City of Grande Prairie committees: Public Works, General Government Services, Legislative Review, Traffic and Parking Advisory, Protective and Emergency Services, Police Commission, Library Building, Northern Mayors' Caucus, Utilities Steering, Community Knowledge Campus, Twin Ice Arena Building, Community Services Board, and Assessment Appeal Board. Dwight's Grande Prairie experience included volunteering with PACE, Big Sisters and Big Brothers; serving as a director in many organizations (Peace Counselling, Chamber of Commerce, Municipal Planning Commission, Canadian Red Cross, Grande Prairie Airport Commission, Prairie Art Gallery, GP Museum, Community Foundation of Greater Grande Prairie, and the Centre 2000 board); and as Chairman of others (Grande Prairie & District United Way, John Howard Society, Subdivision and Appeal Board, Downtown Association). He also served on the provincial boards of CUSO, Alberta Urban Municipalities Association, Alberta Hotel Association, Alberta Press Council, and the Provincial John Howard Society.

A finding aid is available at http://southpeacearchives.org/dwight-logan-fonds/