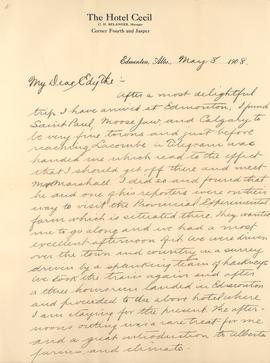 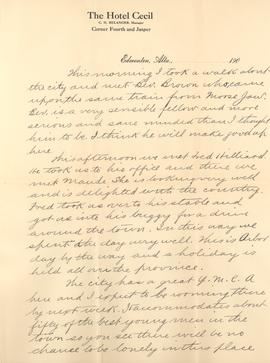 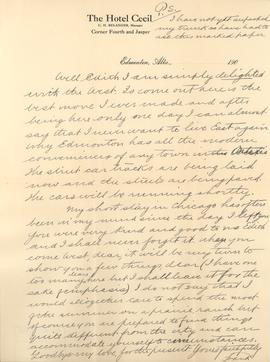 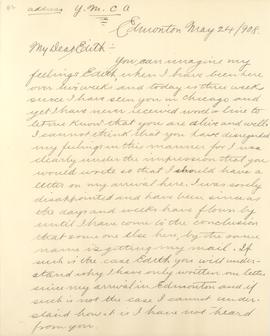 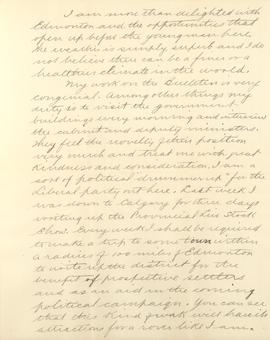 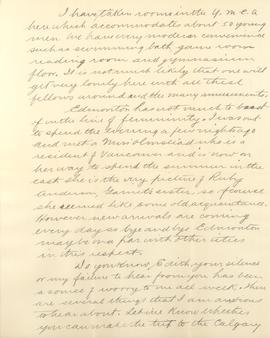 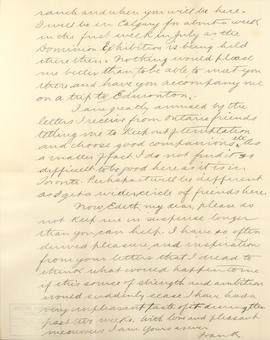 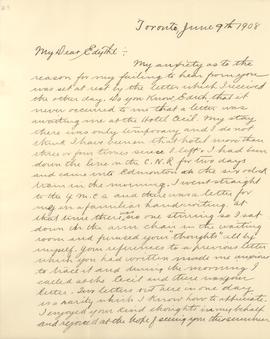 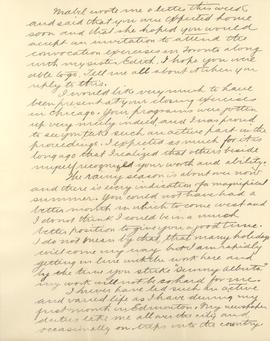 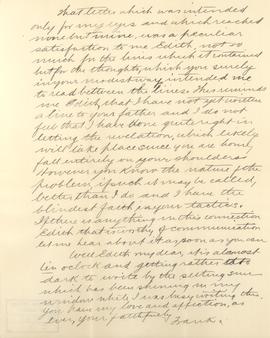 Edith Lillian Sander a daughter of the merchant Soloman Sander, lived in Berlin, Ontario. In 1906 she traveled to Chicago, USA to study music and painting. She returned to Berlin in 1908 and became a soprano soloist in a local church choir. She met Martin Frank Dunham in 1904 in Berlin, Ontario and courted him until 1911 when they were married on November 15. They returned to Camrose, Alberta where Martin had been living and together they had two children, Hazel Mirriam, born November 14, 1912 and Mary Frances, born March 1914. The family moved back to Ontario at the outbreak of World War I. Edith Lillian Dunham died in 1955, pre-deceased by her husband Frank who died in 1948. Martin Frank Dunham was born on October 9, 1882 in Harriston, Ontario to Martin Squier Dunham and Magdalena Eby. Martin Squier Dunham's family were United Empire Loyalists who came to Canada from the United States in 1783 to settle first in Parr Town, New Brunswick, and later Ontario, first in Newmarket, then Harriston. Magdalena Eby's family was of Pennsylvania Dutch extraction who had settled in Berlin, Ontario, now Kitchener. Frank Dunham studied at Normal School then taught in Berlin during the years 1902-1904. He spent the summer of 1904 in the south of England engaged in Stereotype photography and returned to Ontario in the fall to attended the University of Toronto. He spent the summer of 1905 in England again engaged in Stereoscope photography, this time in northern England and the Lake District, and then returned to the University of Toronto in the fall of 1905. Dunham graduated with a Bachelor of Arts in Literature and worked for a year at the <em>Toronto Daily Star</em> newspaper. In the spring of 1908 he moved to Edmonton, Alberta to serve as the commercial editor for the <em>Edmonton Bulletin</em> and in 1909 he became the news editor for the new Edmonton daily <em>The Capital</em>. He was also responsible for a weekly farm paper, <em>The Alberta Homestead</em>, and a weekly city paper, <em>The Saturday News</em>. By 1910 Dunham was working as editor of the new <em>Camrose Canadian</em> and <em>Camrose Bulletin</em> for George P. Smith, and in the spring of 1911 he worked with Smith on Smith's campaign in the election called by the Liberals for the fall. Very soon after the election Dunham traveled to Ontario and married Edith Lillian Sander, whom he met in Berlin, Ontario and courted for seven years, and they returned to live in Camrose, Alberta. Together they had two children, Hazel Mirriam and Mary Frances. At the outbreak of World War I the Dunham family moved back to Berlin, Ontario and Frank Dunham obtained a position with the <em>Stratford Beacon Herald</em>. Dunham died in St. Catherines, Ontario in 1948, survived by his wife Edith, who died in 1955.

Mrs. Hazel Cleghorn, a daughter of Edith and Frank Dunham, deposited these records in the Provincial Archives of Alberta in 1972.

The fonds consists of letters written by Frank Dunham to Edith Lillian Sander during their courtship.

The records have been arranged in chronological order.

Further accruals are not expected.