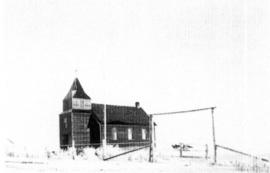 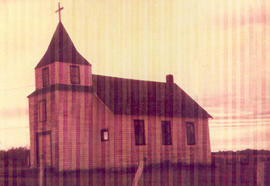 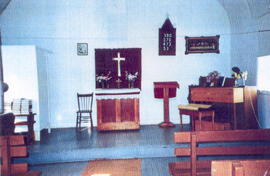 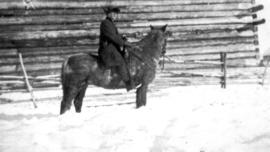 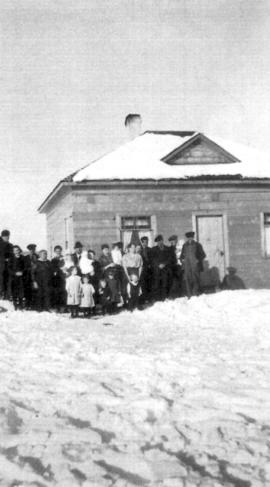 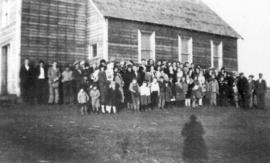 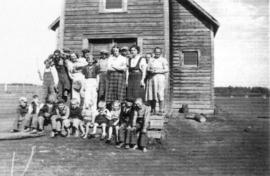 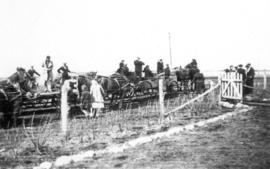 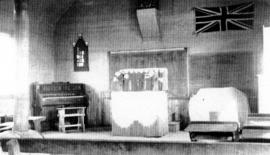 Emmaus Lutheran Congregation in the North Kleskun District was officially organized on April 14, 1929. However, its beginnings go back to 1915 when the first German Luthern pioneers, the August Kirstien and Gregart families settled in the area. Others followed from 1919-1921. In the fall of 1921, Rev. O. Walther was located at Waterhole and served North Kleskun once a month, holding services at the homes of various families. In 1923, Rev. Theo Waack succeeded Pasor Walther and held services in the North Kleskun School. In 1926, Rev. Wildgrube organized the first formal congregation with a constitution and charter members Fred Weis, Edward Steinke, Louis Steinke, Fred Klein, Ian Maxwell and Joe Huber. In 1930 a church was built and land for a cemetery and church yard donated by Louis Steinke and by Christmas that year, the first Missouri synod Lutheran Church in the Peace Country became a reality. Pastors who served the church in the coming years included Rev. R.E. Luening, Rev. Fred Gabert, Candidate Alfred Miller, Candidate A. Pluntz, Student Walter Schienbein, Candidate H. Hafner, Rev. E. George Pearce, Rev. Adolf Bickel, Rev. Edwin Regal, Vicar Donald Lutz, Rev. Kurt Bickel, Rev. Eldon Ohlinger, and Rev. Gordon Schultz. In 1935 a parsonage was completed and used until 1946. A Christian Day School opened in 1932 and terminated in 1943 with amalgamation with the North Kleskun Public School. During the sixties, the ladies of the congregation formed a branch of the Luthern Women's Missionary League which was later disbanded. The church still maintains a congregation in 1979.

The records were deposited in South Peace Regional Archives by Phyllis Johnson in 2006 and by Marian Steinke in 2008.

The fonds consists of two small booklets and 39 copies of photographs detailing the history of the Emmaus Lutheran Church in the North Kleskun district east of Sexsmith, AB. The booklets celebrate the 50th anniversary of the church in 1979 and the dedication of the new church in 1994. Also included are copies of the Constitution in German and English, legal documents, copies of minutes 1929-1999, copies of the register of baptisms, marriages, and deaths (1916-2008); confirmations, cemetery records, miscellaneous documents and history notes and a bulletin from the Lutheran Women's Missionary League.

The records were deposited in South Peace Regional Archives by Phyllis Johnson in 2006 and by Marian Steinke in 2008.

A finding aid is available at http://southpeacearchives.org/emmaus-lutheran-church/