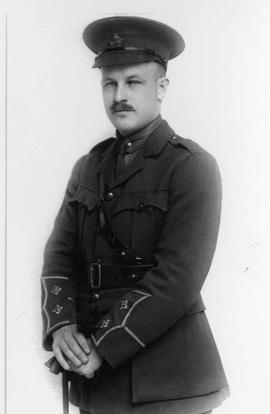 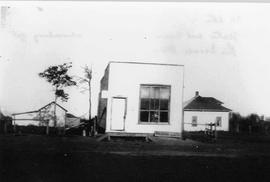 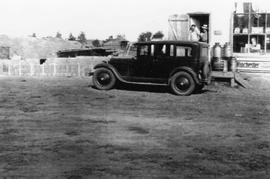 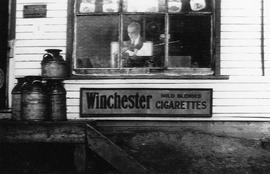 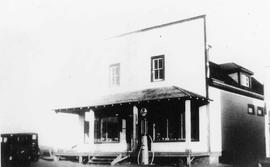 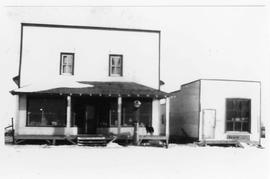 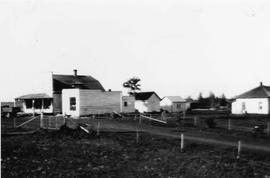 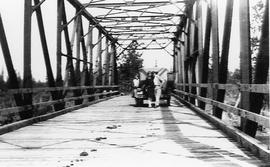 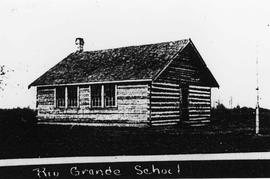 Ewen Fuller MacDonell was a nephew of J.D. MacArthur, the builder of the E.D. & B.C. Railway. Born in Ontario in 1892, he first came to Alberta to work on the railway, but left to enlist in World War I. He served as an officer from 1915-1919, first with the 73rd Highland Battalion, then 154th Glengarry Highlanders and 7th Battalion Canadian Railway troops. He was discharged in 1919 and took a homestead at Rio Grande, Alberta, bringing in two carloads of cattle and horses from Edmonton. In 1920 Ewen became the postmaster in Rio Grande, and in 1921 he and Alex MacIntosh opened the first Rio Grande Store. Supplies for the store were hauled by horse and wagon from Grande Prairie, 43 miles away. The supply trip took four days, two there and two back. Ewen and Alex also built two houses and a barn beside the store, and this became the eastern half of the small community of Rio Grande. Across the road was St. Patrick's Catholic Church and Rectory and the Rio Grande Hall, a mile to the north was the Rio Grande School, and south along the banks of the Red Willow River was the Rodeo Grounds. In the prosperous late 1920s, about 1928, a new and larger store was built with living quarters upstairs and a pump to sell gasoline. In 1936 Mr. MacDonell sold the store to Joe Barrett. He passed away in 1970.

Copies of the photographs were donated to South Peace Regional Archives by Doreen MacDonnel, daughter-in-law to Ewen MacDonnel, in 2007.

The fonds consists of nine photographs of Ewen MacDonell and the store-post office at Rio Grande which he owned and operated from 1920 to 1936. There are also photographs of the Rio Grande School the bridge over the Red Willow River.

Copies of the photographs were donated to South Peace Regional Archives by Doreen MacDonnel, daughter-in-law to Ewen MacDonnel, in 2007.

A finding aid is available at http://southpeacearchives.org/fonds-276-ewan-macdonell-fonds/