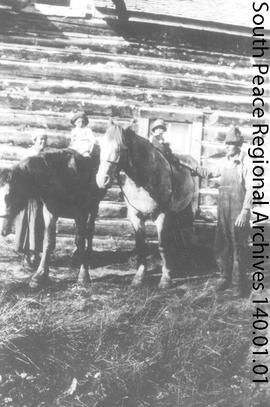 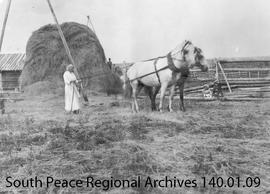 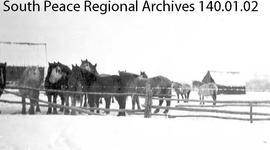 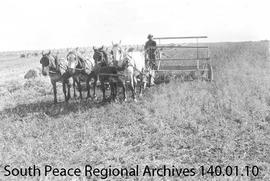 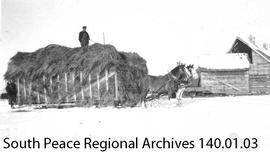 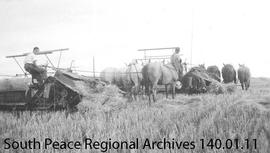 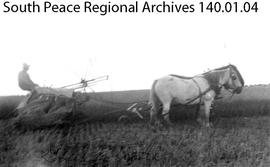 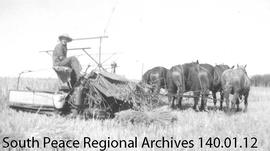 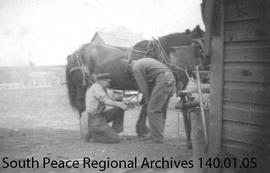 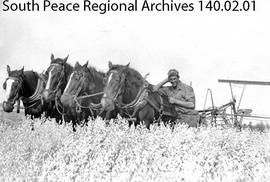 Frank Stoll's father, George Mitchell Stoll, arrived at Lake Saskatoon on June 2, 1910, along with his brother Charles. They had traveled over the Long Trail, via Grouard by ox team, coming into the area when the grass was lush and the wild flowers and fruit trees were coming into bloom along the creek. Having spent the previous few years as cowboys in the state of Montana, they decided their homesteads were ideal for the raising of livestock. A shack, barn and corrals were built of logs, some land broken and wild hay stacked that first summer, so they were prepared for winter. In 1916, with the arrival of the railway at Grande Prairie, Frank's mother, Theresa Smith came from Toronto to visit her sister, Mrs. Percy Clubine. While here, she met and married George Stoll, never to return to Toronto again. The young couple moved into a new house built on the farm and George purchased his first horses to replace the oxen that had, till then, been the beasts of labour on the farm. The Stolls farmed in the Lake Saskatoon area for the next years. Four children were born to them: John in 1917, Frank in 1919, and Aleida. In 1940, Frank married Irene Bradley, and built a small home on his own quarter. Two children were born into this farm family: Joan in 1942, and Gordon (Bud) in 1944. Meanwhile, the dependence and love affair with horses continued. Frank had numerous teams, all personalized with names in their photographs: Maggie & Jessie, quality Clydesdales; Minnie & Maud, Percheron Crosses; the six horse field team of Maud, Highness, Bob, Owen, Bessy and Jessie. Even the children had their own pony, Tiny Tim. By the time they were going to school, they could ride and control him on their own. After the war, some of the farm work was done with tractors, but Frank liked the horses for doing winter work and for chores around the farm yard: hauling wood, cattle, feed for the cattle, manure from the barn. For a couple of winters they hauled the mail from Wembley, where the train dropped it off twice a week, to Pipestone Creek. In an emergency, when the roads were blown in or heavy with mud, the horses were able to go where the vehicles could not. Minnie & Maud could get the family into town even when the roads were impassable. Frank always liked to make his horses look good, with Scotch tops/collars and braided tails, and spreaders of red, white and blue rings on the harnesses.

Irene Bradley was born in Rouleau, Saskatchewan in 1921, the daughter of Sarah Keyworth and Charles Bradley. Sarah Keyworth had immigrated from England in 1913, when she was about 25 years old. She eventually landed in Rouleau, Saskatchewan where she worked on a farm. Here she met and married Charles Bradley in 1918. Her first daughter, Irene, was born in 1921, and in 1927 they moved to the Wembley District in the Peace River Country. In 1929 a second daughter, Mable, was born. During the thirties, the family moved several times with Charles working for other farmers but always on the look-out for a farm of his own, which he finally found south of Wembley. Irene married Frank Stoll in June 1940. She had two children, Joan in 1942 and Gordon in 1944. Sarah passed away in 1970, at the age of 82, and Irene in 2005 at the age of 84.

The fonds consists of 41 photographs showing Frank’s relationship to horses from his childhood to his own well-established farm, some photographs of an ice-cutting business he operated in the 1940s and some miscellaneous photographs of Pipestone Creek Store and a 1937 pack trip into the Rocky Mountains taken by students and teachers of Upper Canada College in Ontario.

A finding aid is available at http://southpeacearchives.org/fonds-140-frank-stoll-fonds/