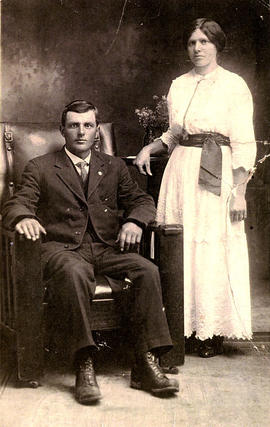 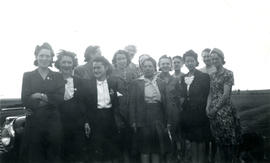 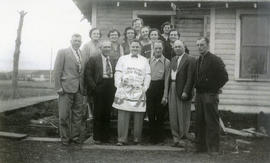 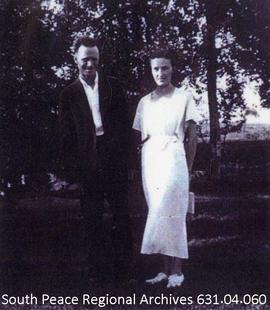 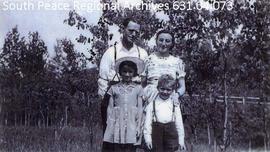 Ignatius Gus Gass was born in Rastadt, Russia Feb. 15, 1874 to parents Francis and Katherine (Reinhart), along with siblings Elizabeth, Jacob, Mary, Natelle and Veronica. Ignatz served at some point in the Russian Imperial army with his brother Jacob. In 1896 Ignatz was married to Katherine Schmidt who was b. Aug 3, 1878 to parents Thomas Schmidt and Anastasia Wormsbecker. Katherine’s mother Anastasia was a widow when she married Thomas Schmidt, her previous husband was Frank Lerner. Anastasia had three children with Frank Lerner; Michael, Anna & Joseph and three children with Thomas Schmidt; Dorothy, Jerome and Katherine.
Ignatz and Katherine’s first two children were born in Russia, Jacob in 1897 and Anastasia in 1899. In 1901 the family left Russia traveling on the ship the Frankfurt, their son Frank was born on board Dec. 26, 1901. The family landed in Galveston, Texas and settled in Henrietta. Ignatz went to work as a clerk in a dry goods store and in 1906 became a naturalized American citizen and purchased land. The land was located on the West half of Block 66 in the Western Addition to Henrietta and a part of a 10 acre tract out of the T & N.O.R.R. Co. survey. A daughter Rosemary (1906) and son Anthony (1908) were born in Henrietta. In 1910, Ignatz & Katherine sold their holdings and the family relocated to the Qu ‘Appelle District of Saskatchewan where Ignatz was again working as a clerk in a store. By 1913, the Gass family had settled in the Rastadt area of Saskatchewan where many people they knew from Russia had relocated. Ignatz purchased the NW & SW of 3-18-24-W3 where he farmed with the help of his sons. Ignatz was also acting postmaster from 1913-1920 and a commissioner of oaths. In Rastadt, (also referred to as Fox Valley) five more children were born; Josephine, Katherine, Sophie, Barbara and Thomas.

In 1920 two of their children were married, Jacob married Anna Marie Lerner and Anastasia married Mathias Anton. In 1924 Rosemary Gass married Jacob Anton, she passed away in 1929 and is buried with her son Victor in Rastadt Holy Trinity R.C. Cemetery. Ignatz and Katherine took over the raising of her young son Tommy who was three years old. The family then made another move leaving Rastadt for the Hythe area in 1929 where their son Frank had already settled.

Ignatz and his family farmed on N.W. 9-73-11-W6 as well as S1/2 8-73-11-W6 which was originally the Lovatt homestead. In 1930 their son Jake and his family settled in the Annallen district. The family farmed and became involved in the social events in the area. Ignatz passed away suddenly in 1934 and Katherine later in 1959, they are both buried in the Hythe Cemetery. Ignatz and Katherine's children and what happened to them -

Jacob Gass and his wife Mary had seven children and lived on a farm by Hythe.

Anastasia Gass with her husband Mathias had five children and they settled in Medicine Hat.

Tony Gass married Anna Schmidt and they had three children and lived in the Hythe area.

Josephine Gass married Clifford Henderson and they had two children. They lived for a time in the Yukon and later settled in Campbell River, B.C.

Katherine Gass married Andrew Hudec and they had two children. They lived for a time in Clairmont and later moved to Kelowna, B.C.

Sophia Gass married Fulton Lea Hodgson and with their six children stayed in the Hythe area.

Barbara Gass married Arnold Reid in a double wedding at Circlebank Hall with her sister Sophia. They had six children and they stayed in the Hythe area later moving to Kelowna.

Thomas Gass served as a mechanic in WWII. When he came back he farmed and lived with his mother, Thomas never married.

Tommy Anton grandson to Ignatz and Katherine married and had five children.

The records were collected by Sophia Hodgson and then passed on to her daughter Edna and donated by Edna Greber's children.

The fonds consists of records relating to the Gass family. They are divided into four series: Ignatz and Katherine Gass, Thomas Gass, Gass family miscellaneous papers and Gass family photographs. There was no discernable order when the records arrived and an order was created by the archivist.

The records were donated by Edna Greber's children.

A finding aid is available at http://southpeacearchives.org/holdings-2/finding-aids/fonds-631-gass-family-fonds/