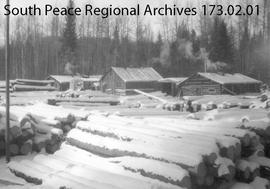 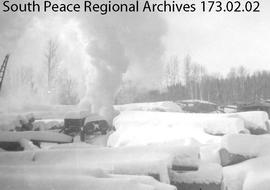 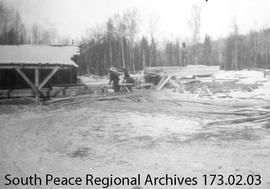 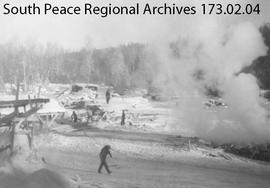 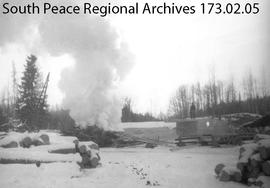 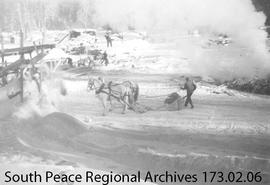 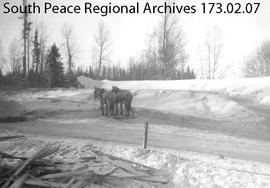 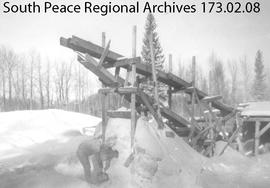 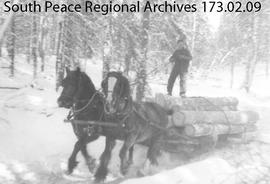 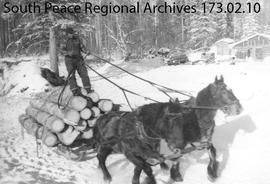 In the late 1940s and up to the mid 1950s, revenue from farming was often below expenses, and working in a lumber camp for the winter was one way a farmer could supplement income. In the winter of 1947 Gaston Mencke went to work at the McCrae Lumber Co. at Faust. His first job was doing odd jobs in the mill yard, an area of about 15 to 20 acres with the bunk houses and cookhouse on one side and the actual mill on the other. Later he was given the job of clearing the edgings and slabs. Most of the transportation at the McCrae Mill was still done with horses, although the finished lumber was hauled by truck. In 1949, Gaston and a partner began falling trees for the Park Brothers Sawmill in the Whitemud Creek area, a job he continued to do for seven winters. Fallers were paid by the tree, which they cut using crosscuts and swede saws until power saws became available about 1951. On an average day, they would cut, limb and top 125 trees. The Park Brothers mill was a 24 hour operation on an 80 acre millsite for the 60 to 75 employees. Camp buildings included a cookshack and dining room, office and small store, two shops to service cats and trucks, a warehouse to store supplies, and three bunkhouses: one for the fallers, one for the catskinners, and one for the millworkers. The mill was originally powered by steam, then by diesel. After the Park Brothers finished logging their permitted area in 1955, the mill was closed and Gaston spent his winters, now with a young family on his farm. He retired from farming in and moved to Grande Prairie. His memoirs, "Recollections of my Days in the Bush Camps" was written in 1997 for a display on the history of the Lumber Industry at the Grande Prairie Museum.

These records were donated to South Peace Regional Archives by Gaston Mencke in 2005.

The fonds consists of Gaston Mencke's memoirs of the McCrae Lumber Co. at Faust, Alberta in the winter of 1947-48, and the Park Bros. Lumber Camp from 1949-1955; 43 photographs of the two camps; and 12 photographs showing modern equipment working at the Weyerhauser Mill south of Grande Prairie in February 1998.

These records were donated to South Peace Regional Archives by Gaston Mencke in 2005.

A finding aid is available at http://southpeacearchives.org/gaston-mencke-fonds/