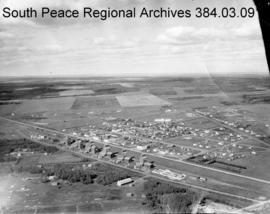 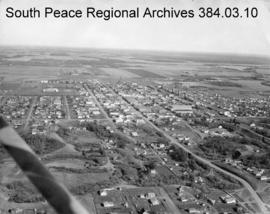 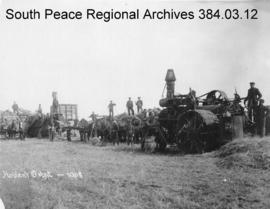 Gerald Victor Carveth was born in Leskard, Ontario on September 13, 1897. He was the son of Arthur William and Elizabeth Carveth. His father and two brothers, Cecil and Rupert, arrived in the Grande Prairie area in 1911. His father returned east the following year to bring Gerald, his mother, and his sister Rita to join them. The family homesteaded on NW, NE, SE 10-72-5-W6th. In September 1915, Gerald filed on his own homestead, SW 6-73-4-W6th. Gerald Carveth and Gladys Clarkson were married on February 14, 1923. Gladys Clarkson was born November 17, 1897 at Williamsburg, New Brunswick to Martin and Elizabeth Clarkson. Her siblings were Albion (Slim), Jennie, James,and Douglas. In 1900 the Clarkson family moved to New Westminster, British Columbia, and later Chilliwack before moving to Grande Prairie in 1919 where they purchased SW 4-72-4-W6th. Before her marriage to Gerald, Gladys was employed as a teacher. Gerald and Gladys Carveth bought the Arthur Carveth farm, where they lived for 31 years. Three children were born to the Carveths, Jim, Betty, and Edna. Gerald was also involved in the life of the community. Interested in baseball, he played on senior teams in the area for 21 years, starting in 1914 with the Deep Creek Seniors. He also managed the boys' Twilight Tigers and the Ladies' Twilight Softball Team for several years. Gerald served as Chairman of the Board for Twilight School District No. 4417 from 1930 to 1933. He also participated in local UFA work, serving as both secretary and president. After retiring from farming in 1954, Gerald became secretary-treasurer of the Grande Prairie County Agricultural Society fair, Secretary-Treasurer of the Grande Prairie & District Old-Timers' Association, director (later treasurer, then city and district chairman) of the Grande Prairie and District Branch Canadian Cancer Society, and a board member of the Pioneer Museum Society of Grande Prairie and District. Gerald Carveth died on April 13, 1982 in Grande Prairie at the age of 84. Gladys died on July 14, 1995, also in Grande Prairie.

The records were donated to Grande Prairie Public Library with the Isabel Campbell collection. In 2008 the Library donated them to South Peace Regional Archives. Some of the photographs may or may not have originally belonged to Carveth.

The fonds consists of records relating to the personal life and interests of Gerald V. Carveth. The records contain scrapbooks of newspaper articles assembled by Carveth on a variety of topics including family, pioneers, local events, sports, general news, and cancer; copies of the first issue of the Tattler publication; twelve photographs taken around the Grande Prairie area or of events in which local residents participated; and a certificate of appreciation from the Grande Prairie and District Old Timers' Association.

The records were donated to Grande Prairie Public Library with the Isabel Campbell collection. In 2008 the Library donated them to South Peace Regional Archives. Some of the photographs may or may not have originally belonged to Carveth.

A finding aid is available at http://southpeacearchives.org/gerald-v-carveth-fonds/