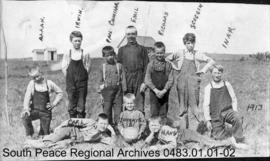 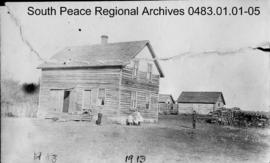 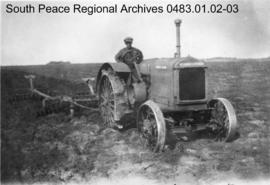 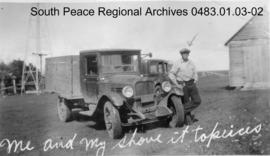 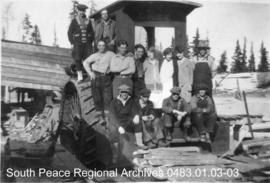 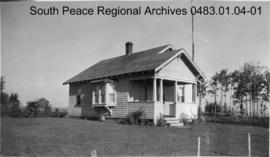 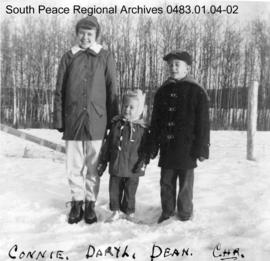 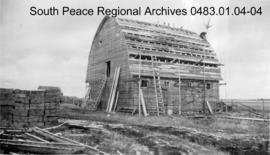 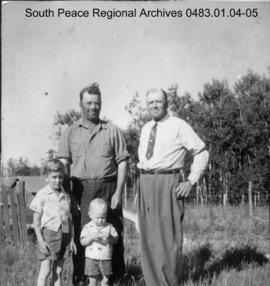 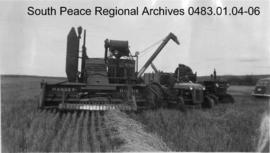 Hans Arnold Christianson was born in North Dakota, March 9, 1903. In 1905 the family came to Naughton Glen, Alberta and settled in the Beauvallon area. His mother was Mina Christianson (1878-1958). In 1913, he was attending the Stoney Rapid School and had George Murray for a teacher. Arnold was the oldest child with brothers Karl and Harold and sisters Ida and Betty (Hasuik). Arnold moved to the La Glace area and on Sept 17, 1928, and filed on a homestead quarter of land NE-1-75-9 W6. He farmed in the area for 35 years. In 1941, he married Isabella Metcalfe. Isabella was the daughter of Tom and Jane (Cahoon) Metcalfe. Tom came to Canada from Sunderland, England in 1904 and worked as a farm hand in Manitoba where met and married Jane, who had come to Canada from Ireland for a visit. Isabella was the third child of five children and spent a number of years in England with an aunt and finished her schooling in Grande Prairie when she returned in 1922 as her parents were now in the Hinton Trail area on a homestead ( NW32-69-10-W6). She later obtained her teacher certification and taught in the district for 33 years. Arnold and Isabella were married in 1941. They had no children. They were both involved in the development of the South Peace Centennial Museum in Beaverlodge. Arnold and Isabella retired to Kelowna in 1974. Isabella died in 1984 and Hans Arnold died in 1985.

These records were passed on to Rudolf Olson and then given to Doreen (Bekkerus) Kuryvial of Edmonton who donated them to the South Peace Regional Archives in 2011. A copy of Arnold Christianson's diary was collected by Dorphy Bekkerus and passed on to Lavern Sorgaard by her son Darrel Bekkerus. Lavern donated the diary copy in April 2014.

The fonds consists of a family album of photographs, a scrap book of clippings including local news items, weddings, sports teams, obituaries, and a 8 page typed copy of Arnold's Diary (1931 to 1966). The diary contains highlights of community happenings including marriages, deaths, and funerals.

Doreen (Bekkerus) Kuryvial of Edmonton donated these records to the South Peace Regional Archives in 2011. Lavern donated a copy of Arnold Christianson's diary in April 2014.

A finding aid is available at http://southpeacearchives.org/hans-arnold-isabella-christianson-fonds/