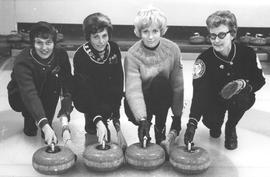 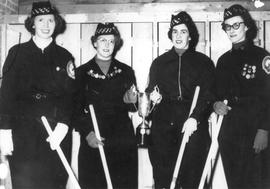 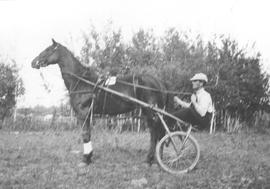 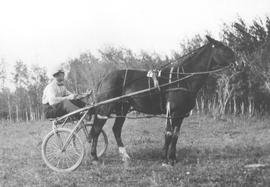 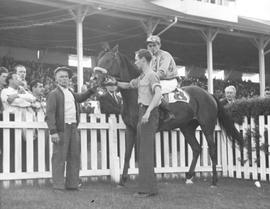 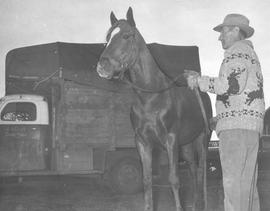 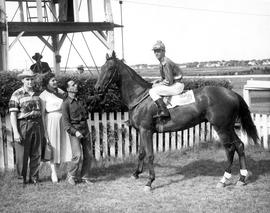 Helen Ellis was born in 1922 to Ewart and Marjorie Ellis, who were early pioneers in the Grande Prairie area. Helen's mother, Majorie Clark Ellis, came to Grande Prairie in 1914. She was the first stenographer in Grande Prairie, working for the Post Office and later the Land Office. Helen's father, Ewart Alphonse Ellis, came to the Clairmont area over the Long Trail in 1911. He was an excellent violinist, a farmer and the operator of a Feed, Livery and Sales Stables in Grande Prairie, but best known for his pacers and their success in harness racing. Miss Ellis's interests evolved around sports, with the same love of horses as her father. When the Second World War broke out, Helen joined the R.C.A.F. Women's Division 1941-1943 as a L.A.W. After her return to civilian life, Helen proved she had an exceptional flair for curling. She was often on the winning rink, be it ladies or mixed, and attended provincial bonspiels. In 1967, Helen played third on Gerry Fisher's Peace River Rink to represent Alberta at the Canadian Playdowns in Quebec City. There they placed fourth in the competition.

The fonds consists of photographs of Helen Ellis in the Air Force and as a member of various winning Curling Rinks, biographical notes on the Clark and Ellis families, and news clippings of Ewart Ellis and his race horses. There is also a Pioneer Award for Marjorie Ellis.

A finding aid is available at http://southpeacearchives.org/helen-ellis-fonds/