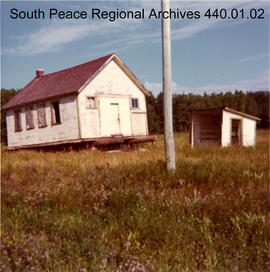 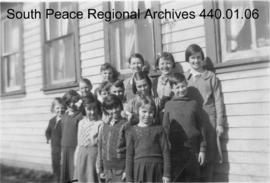 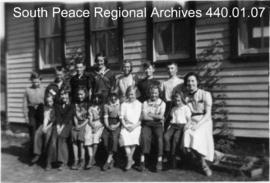 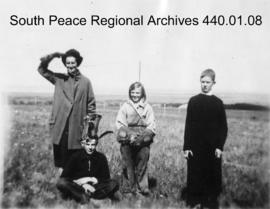 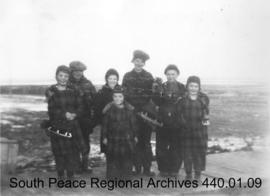 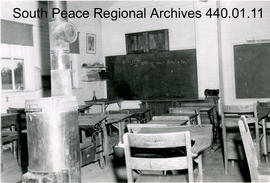 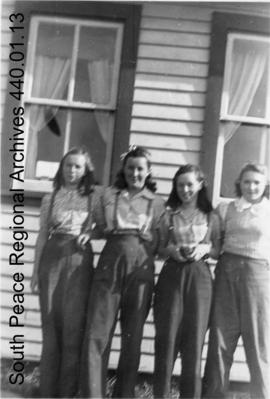 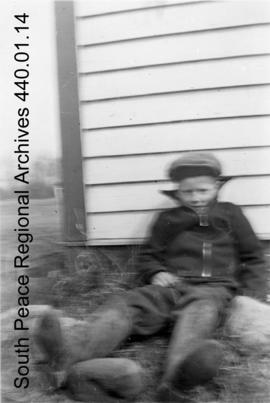 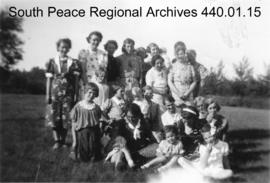 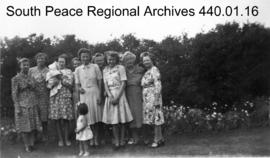 Hermit Lake School District was formed in 1916 and an elected Board of Trustees began planning to build a school. Two acres of land in the south-east corner of Bill Grant's farm were purchased at $.25 an acre. The school was built by William Sharp and finished in time for classes to start in March, 1917, with Mrs. Molly Sharp, Bill's wife, as the first teacher. Some of the earliest families attending the school were the Jebbs, Cranstons, Kennedys, Fergusons, Aikens and Andersons. Teachers who taught at the school at its original location include:;Mrs. Sharp, Major Tawney, Miss Emmet, Miss Kerr, Miss Nettie Sharp, Miss Moffat, Miss E. Holmes, Miss Rea Chambers, Miss Lena Morden, and Miss Thelma Fisher. In 1928 the school was moved to a new location on the SE-5-72-7-W6 purchased from Fred Evans. School Board trustees included Bill Grant, Rollie Wood, Bill Mc Levin, Leo Ferguson, Alex Ross, Elmer Gillespie, and Ken Anderson Sr. In June, 1956, Hermit Lake School was closed and students transferred to Wembley, Lake Saskatoon, or Grande Prairie County School.

The records were donated to the South Peace Regional Archives by Ellen Craig, resident of the Hermit Lake District in 2010. A second scrapbook, also documenting the Hermit Lake School Reunion, was donated by Pearl Fee in 2013.

The fonds consists of a Hermit Lake School history book researched by Grace (Wishart) Stewart, a former teacher, when the school was moved to the museum. It was compiled by Ellen Craig and contains history of the school and community, lists of families and teachers, photographs, stories from former students, documents, news clippings, school census records (1937-1955) and a history of its becoming the pioneer school of Grande Prairie's Pioneer Museum in 1978.
An accrual, donated in 2013, contains original records compiled by Kay Dunlop after the 1978 reunion and added to a scrapbook by Ina Fee, who was also a student at Hermit Lake School. This scrapbook also contains news clippings related to the City of Grande Prairie, the Grande Prairie Museum, and people and history from the Grande Prairie area. There is also a circular list regarding an RCAF/WAAF Reunion held in Vancouver in 1976, which included several women from Grande Prairie.

The records were donated to the South Peace Regional Archives by Ellen Craig, resident of the Hermit Lake District in 2010. A second scrapbook, also documenting the Hermit Lake School Reunion, was donated by Pearl Fee in 2013.

A finding aid is available at http://southpeacearchives.org/hermit-lake-school-history/