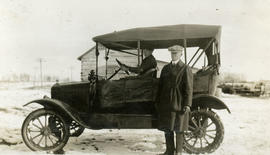 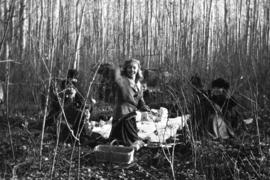 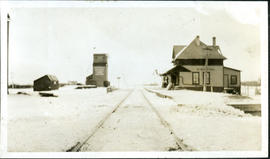 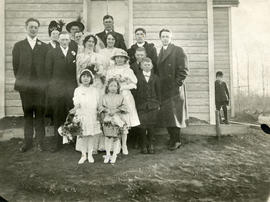 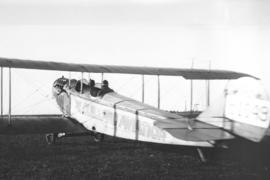 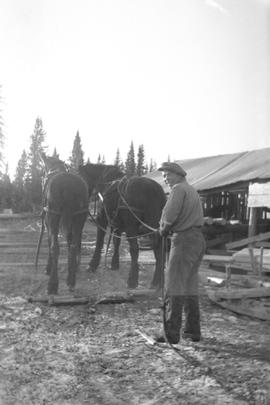 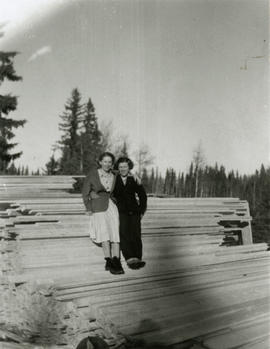 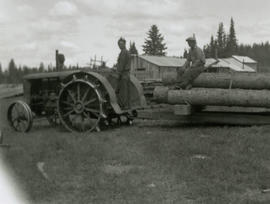 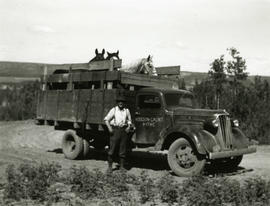 Hodgson’s Saw Mill
Lea had a long-standing interest in forestry. Lea and his father John started a mill on the Cutbank River before 1933. They applied at the Forestry office in Grande Prairie for a timber birth and then purchased a second hand sawmill from Lester Hommy. Labor was provided by neighbors who often worked in exchange for timber for their farm sites. The first building at the mill site was a shelter over the mill and then they added bunkhouses, tool sheds and other buildings. They employed many people, loggers included Jim Holly, Aubrey Hawkesworth, Mike Weller and Carl Moller. Max Sudnik of Lymburn was in charge of hauling the lumber out on the rough roads. Lea’s mill supplied the lumber for the Hythe Curling Rink, delivery was free of charge. The lumber from the mill was also used in the conversion of the barn on Lea’s property to the family home, Steve Olichny was the builder. Demand for lumber escalated during WWII and the Americans based in Dawson Creek bought up Lea’s stockpile. In 1944 Hodgson’s Mill was sold to James Elliott and James Gault, Lea took over running the Frontier Lumber Yard in Hythe. Frontier Lumber later became Beaver Lumber and Lea worked there until his retirement. Lea was awarded a Community Achievement Award in 1980 from Beaver Lumber for devoting time and energy to community activities.

H.O.P. Lake
Lea heard about a secluded lake with sandy beaches, crystal water and easy fishing from a Native American man who would often stop and visit the Hodgson Mill. It was located six miles from the mill but Lea put off trying to find the lake until the early 1950’s. One day Lea and his son Jim decided to see if they could locate it, and after searching most of the day they were happy to discover that the fishing was just as their friend has advised. Upon return Lea told two friends about the wonder of the lake, Art Pearson and Bill Oakford. The three of them decided a road was needed into the lake and they proceeded to build one. The lake also needed a name and with all the efforts made by these three men H.O.P. Lake seemed like a good fit. Once the road was built the men decided they would like to lay claim to certain lots around the lake. They applied to the British Columbia government for it to be surveyors and later for leases on lots. The men also encouraged many Hythe families to get in on the initial lease buying and many a fun summer was spent out at H.O.P. Lake by Hythe residents. The lake was officially named One Island Lake.

The records were donated by Clayton Greber on behalf of the Greber and Hodgson family in September and October of 2013. The records were collected by Fulton Lea Hodgson and later passed on to his daughter Edna (Hodgson) Greber.

The fonds consists of records relating to the Hodgson family. The records have been divided into nine series; John Fulton personal & financial; Fulton Lea & Sophia Hodgson personal, financial and correspondence; family photographs from Kinistino and Hythe; Edna Hodgson's scrapbook; Hodgson's Mill; H.O.P. Lake/One Island Lake and Hodgson family tree.
The records have been arranged by the Archivists by content and chronology into the various series and files. The records came from so many individual sources, the overall original order of the records had been obscured. The Archivists imposed the order now shown by the records.

The records were donated by Clayton Greber on behalf of the Greber and Hodgson family in September and October of 2013.

A finding aid is available at http://southpeacearchives.org/holdings-2/finding-aids/fonds-630-hodgson-family-fonds/