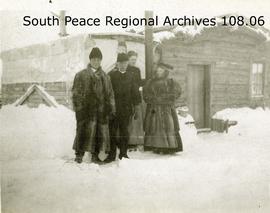 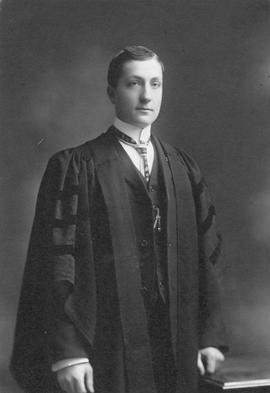 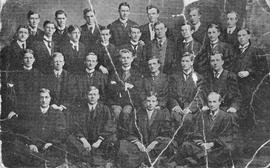 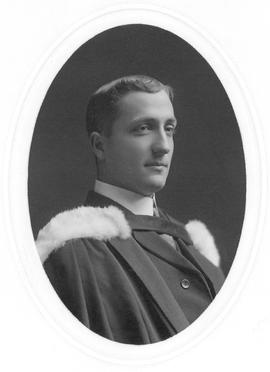 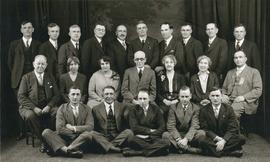 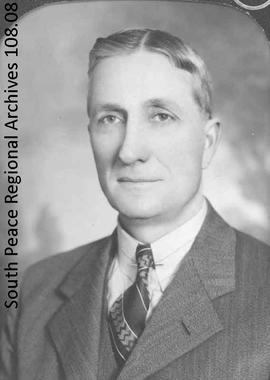 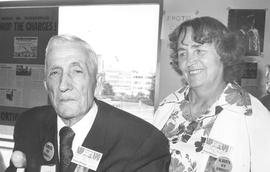 Irwin Victor Macklin was born in Fenella, Ontario in 1888. He attended high school at Alberta College in Belveau, Ontario and went on to a Bachelor of Arts at Victoria College, University of Toronto. Advised by his doctor to "get out into the country" after his graduation in 1910, Mr. Macklin moved west and traveled the Long Trail into the Peace Country that summer. He filed on a homestead east of the hamlet of Grande Prairie on which he would reside until his death 70 years later. I. V. Macklin has the distinction of being the first school teacher in Grande Prairie. When no qualified teacher could be found for the Grande Prairie School District No. 2357 organized in 1911, Mr. Macklin agreed to fill in temporarily. Classes started in January 1913, and he taught until June 30 that year. In 1912, I.V. married Nellie Cass who had been teaching music at Alberta College in Edmonton. By 1914, he was an established Dairyman in the area, and active in the community as a leader in church affairs as well as in agriculture, economics and politics. He was the first magistrate in Grande Prairie in 1914. He served as a director for the Peace River country in the United Farmers Association movement and instigated the Debt Adjustment Act during the Depression. For three federal elections, he was the candidate for the CCF (Co-operative Commonwealth Federation) Party in the Peace River constituency. He was also a well-known radio speaker and writer for the CCF. His articles appeared in papers across Canada, as well as the Grande Prairie Herald-Tribune. By this time, the Macklin's had two children: Velma born in 1913, and Victor born in 1917. Nellie Macklin died in the spring of 1940 and in 1941 I.V. married Matilda Jantz. Four children were born to this second marriage: Irvin in 1942, Arthur in 1945, Ann in 1948, and Hilda in 1954. Mr. Macklin passed away in 1980, having lived in the community of Grande Prairie for almost all his adult life. The Macklin farm was redeveloped as residential lots: the Hillside area at the beginning of World War II, Mountview Estates c. 1970 and Ivy Lake Estates c. 1980.

The records were preserved by Mr. Macklin’s second wife, Matilda Macklin Gordon, and donated to Grande Prairie Regional Archives in 2002. An accrual in 2009 was donated by granddaughter Sadie Macklin.

The fonds consists of photographs of I.V. Macklin as a high school graduate, a university graduate, in the U of T Glee Club, in Grande Prairie with his wife Nellie and Dr. & Mrs. Forbes, on the UFA Board of Directors, as a candidate for the CCF party, at an NDP convention, and as an elderly man at home. The written records consists of a 1910 U of T yearbook; a book of Alberta Cooperative Leaders; a booklet containing many of Macklin’s speeches and radio addresses, called Life is More Than Meat; and some newspaper articles about the life of I.V. Macklin written in 1971. An accrual included a Macklin historical record, "Macklin Road" by Kenneth Macklin.

The records were preserved by Mr. Macklin’s second wife, Matilda Macklin Gordon, and donated to Grande Prairie Regional Archives in 2002. An accrual in 2009 was donated by granddaughter Sadie Macklin.

A finding aid is available at http://southpeacearchives.org/i-v-macklin-fonds/
Please consult before requesting material.