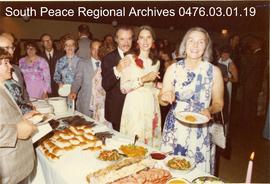 Muriel and Clem Collins in the buffet line at a banquet to celebrate their 25th wedding anniversary, surrounded by many friends. 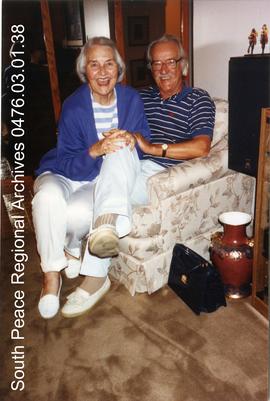 A photograph of Clem and Muriel Collins taken in honour of their 42nd wedding anniversary.

The sub-series consists of records of Muriel's involvement with the sorority Beta Sigma Phi- Alpha Delta Chapter # 8155 from 1974-1991, including the "Book of Ritual", a booklet containing history of the chapter, by-laws, and membership (1975-1976), programs from Founder's Day anniversary banquets, (1974-1991), cards and letters from members, newsclippings and three photographs featuring "Girl of the Year " and "Sorority Queens".

The series consists of the Collins' personal papers and photographs, records of their involvement in the arts, with Grande Prairie Regional College, with the Clem and Muriel Collins Writing Contest for the Grande Prairie Public Library and miscellaneous correspondence. 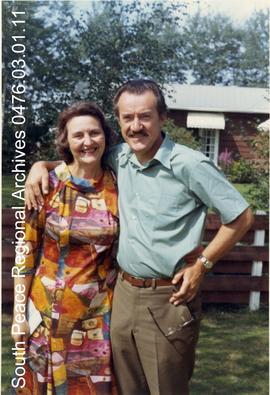 Muriel and Clem Collins outside of their Grande Prairie home. 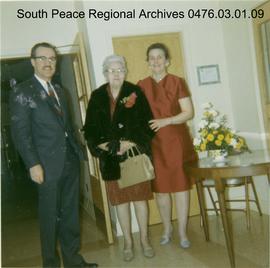 A scene from Muriel and Clem Collins' life in Grande Prairie in the 1950s-1960s, showing them in formal clothing with an elderly lady.

The series consists of Clem's personal papers, records of his professional life and photographs.