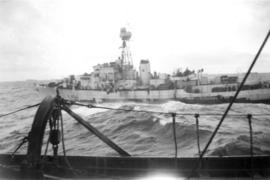 Castle class Corvette in a convoy on the North Atlantic. The Royal Canadian Navy was called the sheepdog navy because of its shepherding of more than 25,000 merchant ships across the North Atlantic. Ships traveled in convoys of as many as 150 ships, perhaps strung across 14 square miles of ocean. The convoys were made up of merchant ships carrying supplies, destroyers, frigates, corvettes, and sometimes passenger liners. 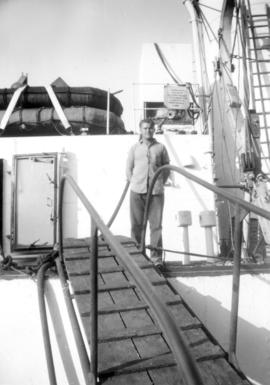 Navy Seaman at the top of the gangplank, the entrance to the Ship. 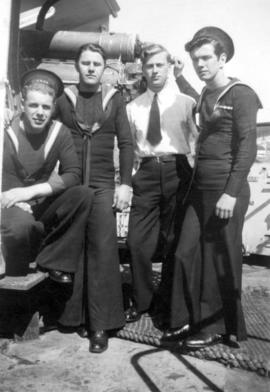 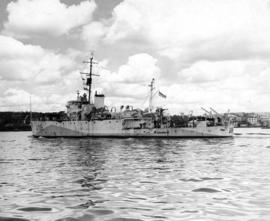 HMCS Bayfield was a minesweeper which patrolled the east coast from Boston to Halifax, dragging the ocean waters for mines planted by German U-boats. 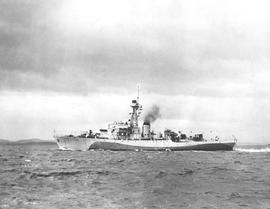 HMCS Orangeville was a castle class Corvette which operated in the North Atlantic. The role of the corvette was to keep convoy ships in line and fend off any subs that got inside the accompanying screen of destroyers and frigates

The fonds consists of 12 photographs detailing Jack Thorpe's service with the Royal Canadian Navy during World War II. Photographs include Jack's official Navy portrait, ships he served on and working on the ships. 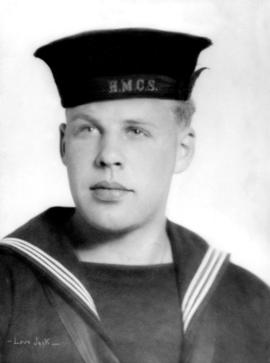 Official portrait of Jack Thorpe in his Navy uniform. Jack Thorpe enlisted in the Royal Canadian Navy Veterans Reserve when he turned 18, at the end of 1941. He served aboard the minesweeper HMCS Bayfield, the Corvette HMCS Orangeville, and HMCS Atholl, a corvette on convoy duty from St. Johns to Londonderry, Ireland. 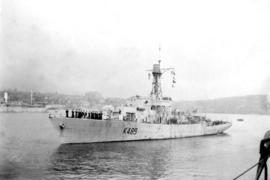 Corvette leaving harbour with navy seamen in formation on deck. 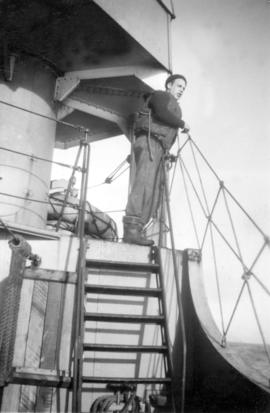 Looking Out to Sea

Navy Seaman Jack Thorpe looking out to sea from the captain's bridge. 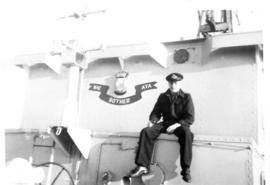 "Nae Bother Ata" was the motto of the HMCS Orangeville. Here, Captain Pike, from Edmonton, sits underneath the motto.