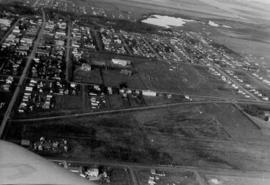 Aeial Photo of Grande Prairie showing Richmond Avenue, the railway, Bear Creek Reservoir,schools in the center of the photograph, and housing to the north and west. 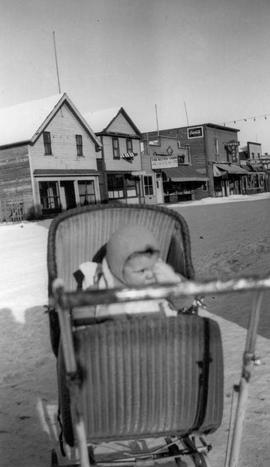 Bobby Lewis in a carriage on Grande Prairie's Main Street. Signs along the street include "For Better Vision" and "Royal Café." 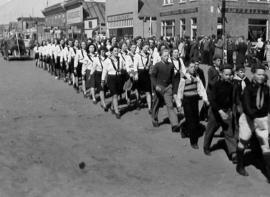 A group of CGIT girls and Cubs parade down Grande Prairie's Main Street. Buildings such as J.B. Oliver's, the Canadian Imperial Bank of Commerce, Porteous Hardware, and James Drug Store are visible in the background. 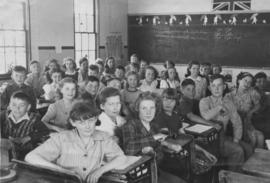 Children in junior grades seated at desks in a classroom in Grande Prairie. 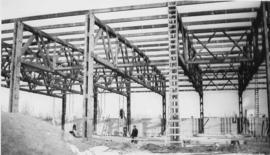 Constuction of the Army Drill Hall (now known as the D-Coy Armouries) showing the framing and roof joists with walls going up. The Drill Hall was used as a vocational training shop for the high school students after the war. 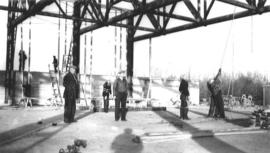 Constuction of the Army Drill Hall

Charlie Turner Sr. on the left of Charlie Turner Jr. during the framing and construction of the Army Drill Hall. The Drill Hall (now known as the D-Coy Armouries) was used as a vocational training shop for the high school students after the war. 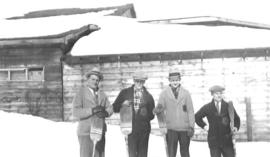 Curling Team Pose by the Rink

A curling team of Jack Mantle, Merv Lewis, ? , and Joe Putters pose with brooms in front of the curling rink in Grande Prairie. 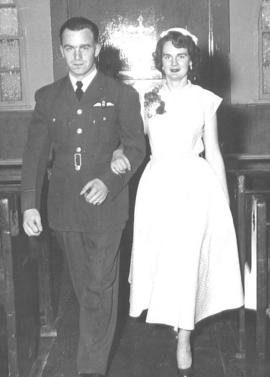 A newly wed Mr and Mrs. Toews walking down a church aisle.

The series consists of 9 photograph prints of Putters family members and friends. 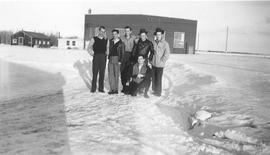 Shops for Canadian Vocational Training were in the Drill Hall. The group pictured were returned veterans taking first year apprentice training (except second from the left - John Putters)