The fonds consists of 14 photographs of Ethel Foote, her cousin Ray Rappel, Jean Goff and Ray's other friends in England, and Ray's wife Rosina. There is also Ethel's war registration card, and a 16 page letter from Rosina to Ethel in September 1944, written in response to Ethel's first letter to her. At the time, Rosina was already married/engaged to Ray and had applied to come to Canada.

The fonds consists of 2 audio cassettes recording Ben Hall's experience during WW II and a brief description of his life after the war.

The fonds consists of some personal papers of Bert and Miriam Tieman; a folder of unframed pencil sketches and paintings; a large photograph and postcard collection, including personal photographs of the Tiemans and their homes; films of their life and activities; and documents relating to their hobbies and their volunteer work with the South Peace Operatic Society, the Grande Prairie & District Association of the Mentally Handicapped, the Town of Grande Prairie when Bert was Alderman, and the Grande Prairie Museum. Also included is a handwritten "Handbook for Wireless Telegraph Operators" c. 1920. An accrual includes birth certificates for Bert and Miriam, a marriage certificate and records of Bert's including a typing certificate (1914), a military draft certificate (1917), a Lay Minister's License (1981), City of Grande Prairie Alderman card, a news clippping showing Bert donating his personal art collection to the Prairie Art Gallery, a thank you letter for service on the Grande Prairie Health Unit Board, a page of Bert Tieman Woodworking letterhead and a memorial card.

The fonds consists of records relating to the LeMarquand family in the Jersey Islands, ships’ records for Bill’s immigration to Canada, papers from his homestead at Thorhild and his farms at Wanham, and news clippings detailing his volunteer career after retirement. The sound recordings include an oral history of Mr. LeMarquand and some communications from the family in the Jersey Islanders. The photographs are of Bill with his first automobile in 1940 and of Bill in retirement, when he received the Volunteer of the Year award.

The fonds consists of autobiographical stories from 18 World War II brides who came to the Peace Country after meeting their Canadian husbands in Britain and Europe during the War. 11 audio taped interviews are also included. 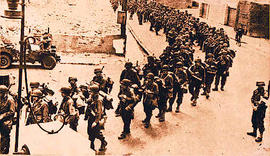 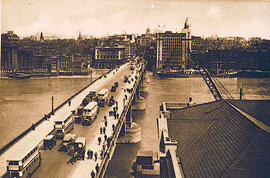