The fonds consists of photographs of the Drumheller area including coal mines (primarily the Rosedale mine), personalities, Toshach store, other Drumheller buildings, and local organizations. Includes Myrtle's papers about the history of the area and posters.

The fonds consists of notebook of minutes and accounts.

This fonds contains records gathered by Bertha Lawrence from her involvement in various organizations associated with the United Nations Association, Edmonton Branch, including Edmonton and District International Aid Society, Miles For Millions, UNICEF, Public Education Committee, and UN publications and policy documents. There is also other material related to Ms. Lawrence's work with international organizations, including the League of Nations.

The fonds consists of a scrapbook created by Bertha Biggs between 1930 and 1962. The scrapbook consists of newspaper clippings pertaining to Edmontonians, especially members of the Anglican church and radio personalities.

Fonds consists of accounts and minutes of the Rural Municipality of Nelson No.638 and the Soldiers' Home Property Register. Also includes notes, historical sketches, and reminiscences written by Bernie C. Hart about various people and places in the County of Athabasca No. 12, including such diverse topics as pioneer histories, the Alberta Social Credit Party, grain elevators, bulls, oil development, municipal elections, fencing, school districts, and Hart's experiences while working as an assessor.

The fonds consists of scrapbooks about the Springbank, Jumping Pound and Pirmez Creek area, including information about the Copithorne and Gardner families.

The fonds consists of materials created or collected by Bessie McAvoy of Edmonton and dating from 1922 to 1992. The fonds consists of clippings; a list of the city mayors; a history of the Edmonton school district with documentation from that history's research; a manuscript of Irene Cornwall re: George Hustler and Lotta Dempsey; Miss McAvoy's memoirs and an autobiography, including details of her old neighbourhood - now the downtown core of Edmonton; miscellaneous articles and a copy of News for Seniors, October 1992. MS 526.3: This fonds consists of related to the life and career of Bessie McAvoy, including her childhood home, her sister Doris Redman, her tennis career, and her education (including two university papers and a copy of "The Souvernir -- Calgary Normal School, 1925-26". This fonds also includes information on clothing, the Glenrose Rehabilitation Hospital, Dr. Chase's Marvelous Medicinal Almanac, and the Second World War Homefront. 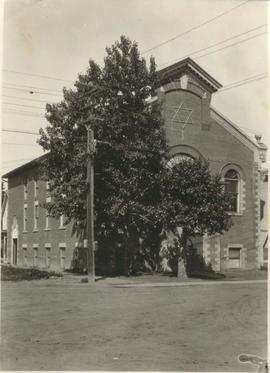