File consists of a copy of three early scores likely by Ann Southam. 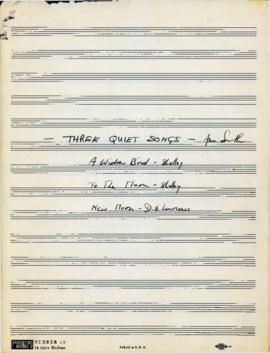 File consists of two draft copies of "Three Quiet Songs" by Southam, one is handwritten and the other a photocopy. The pieces are poems set to music, two of the poems are by Shelley ("A Widow Bird" and "To the Moon") and one is by D.H. Lawrence ("New Moon").

File consists of programs, photographs, and reviews relating to dance collaborations Ann Southam was involved with. Includes the 2001/2002 program from the Danny Grossman Dance company, a performance of "Glass Houses and Other Dances" by Christopher House, "Painters and Dance" (includes a small painting by Aiko Suzuki, two photographs, including one of Ann Southam and others, and other material), photographs of unknown dancers, and a souvenir program for the Toronto Dance Theatre, with reviews from "The New York Times" inside.

Item is a postcard with a Christmas message from Trish [Patricia Beatty]. Includes two small news clippings which were originally attached to the card.

File consists of three poems ("Seastill", "For Annabelle", and an untitled one) written by Southam's friend and collaborator Patricia Beatty. The poem for Southam ("For Annabelle"), features a handwritten note. 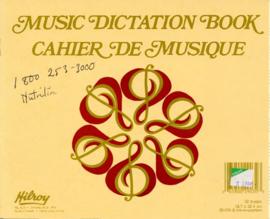 Material found inside "Women and Music: A History"

File consists of material found in a copy of "Women in Music", includes a tag from a Christmas present from Eve [Egoyan?] and a photographic clipping from a program of an unidentified man. 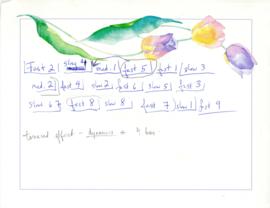 Item is a page of notes relating to "Rivers", on the reverse is a drawing of two dancers by Southam. The file also includes a note by Tamara Bernstein on where the material was found.

File consists of copies of "Images" and "L'isle joyeuse", both of which contain annotations by Southam.