The collection consists of minutes, membership rolls and financial records from the club.

The fonds consists of one minute book recording the actions of the school board as the district is organized and decisions are made about financing, building and using the new facility.

The fonds consists of records relating to the operation of the Kleskun Hill Local No. 370 of the United Farmers of Alberta. The records include two Membership Roll, Cash Book, and Minute Books, loose receipts, loose correspondence, and related literature.

The fonds is divided into two series: Administrative records and Correspondence.

The fonds consists of one minute book, two financial statements and one assessment roll.

The fonds consists of the minutes of the organization from 1963-2003; membership records from 1952-1995; financial records from 1974-2001; correspondence, mostly from Alberta-NWT Command and the Provincial Ladies Auxiliary; and printed materials from the Alberta-NWT Command, head office of the Royal Canadian Legion Women’s Auxiliaries. There are six photographs of the Legion Cenotaph dedication ceremony in Eaglesham. The photos were identified and formed into a poster by the Women’s Auxiliary to commemorate the event.

The fonds consists of one Royal Canadian Air Force Pilot’s Log Book recording training, duty and teaching activities from 1942-1945 and containing documents such as a Pilot’s Responsibility form and Certificate of Proficiency; a Statement of War Service Gratuity from the Department of National Defence, War Service Badge permission card; Personnel Counselling Report from the Air Force; and an Honourable Release Certificate from the Air Force. 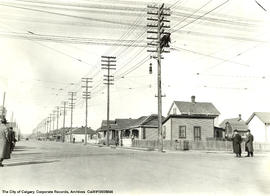