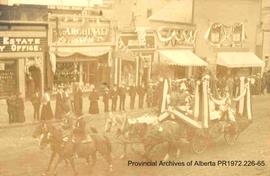 The fonds consists of records created, used, and maintained by the Zonta club of Edmonton including minutes, reports, financial statements, ledgers, pamphlets, correspondence, and publications dating from 1953 to 1993.

Notes and photocopies of constitution and congregational voters meeting minutes (1921, 1932, 1963)

This fonds consists of registers of Baptisms, Marriages, Deaths and Funerals (1917 - 1980) as well as the earlier Church Chronik (in German with translation) which includes the chronicle of the church activities (1904 - 1965). There are bound copies of minutes of the Council (1969 - 1978 and 1978 - 1993); the Voters Meeting Minutes (1944 - 1962); and the Young People's Group/Walther League (1948 - 1960). There is also a copy of the Annual Report 1974; newsletters and service bulletins of special occasions (1959-2001) such as the dedication of the new church. The fonds also contains financial information, correspondence, and membership material relating to the Parish which included Zion Lutheran Church Wetaskiwin, Peace Hills, Emmaus Lutheran Church, Brightview, Emmanuel Lutheran Church, Usona (Waldheim) and Bismark.