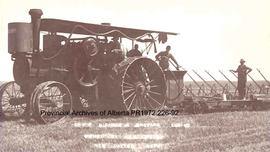 Collection consists of records dating 1912-1973 and includes a report on the Canada Land and Irrigation Company Limited, which contains maps and photographs of areas in Medicine Hat, Alberta, a report entitled The Lost Mine of the Saskatchewan, and a brief history of Medicine Hat. Fonds also includes various photographs relating to engineering, railroads, land and irrigation, and farming.

Fonds consists of negatives dating after 1915 and before 1936, depicting bush pilots, planes, a homestead, and a field hospital. Fonds also includes photographs of certificates inscribed to Arthur Massey (Matt) Berry.

Fonds consists of correspondence to A. Lyall McLean from M.S. (Stewart) Preston, a former employee and a friend, who had homesteaded in Alberta.

A settler's team between Cleverville and Thigh Hill, Alberta

The collection consists of materials pertaining to the activities of the Alberta Agricultural Centennial Committee in 1967. The collection includes programs, pamphlets, bulletins, and two blueprints documenting the burial of a centennial cairn.

The fonds consists of convention programs, newspaper clippings, and photographs documenting the activities of the Alberta Dairymen's Association dating from 1918 -- 1986.

The fonds consists of minutes from general meetings from 1983 to 2003, a record book of attendance from an annual conference from 1962 to 1974, and a history of the Egg and Poultry Association.