Group photograph of the participants in the United Farmers of Alberta Convention, held in Edmonton, January 23-26, 1917. 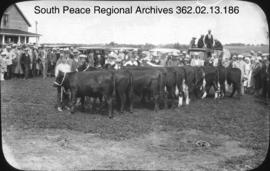 The series consists of photographs taken by Louise Arnold while she was living in the Clairmont area. The photographs consist of pictures of gatherings along the Wapiti, trip to the Beaverlodge Experimental farm, the gatherings at the Bredin family home and Currie school and students.

The fonds consists of 2 original scrapbooks, 1933-34 and 1934-35, and one bound, combined copy made sometime later. The handwritten volumes reflect the years’ activities of the East Milo Juniors, and include biographies, photographs, financial and other reports, drawings, stories and puzzles.

Fonds consist of: a photograph of the Salvation Army Band, a Christmas card, and 3 manuals.

The fonds consists of four photographs and two documents. The photographs are of Jack Crerar in 1924 and Doug Crerar ca. 1940, Bear Creek Bridge ca. 1915, and a Winter Carnival ca. 1924. The documents are a program for the “First Annual Banquet of Grande Prairie Conservative Association at the Empire Hotel Monday, January 17, 1916”; and a program for the “Third Annual Peace River Musical Festival on May 25 and 26, 1927 at Grande Prairie Alberta.” There is also a legal sheet of paper containing a short history of the Alexander and Sarah Crerar family produced ca. 2000.