The fonds consists of the charter and by-laws; financial statements for 1983-1989; special project reports such as skate-a-thons, FCSS van purchase and baseball diamond construction; correspondence and some membership lists; 3 scrapbooks of clippings and photographs from 1956-1966, 1981-1982, 1962-1985.There is a special collection of material regarding the 1966 Klondike Karavan on the Athabasca Landing Trail. The artifacts include 2 large Kinsmen flags, a vest, trophies, six glasses and corporate seals. The national convention was in Athabasca in 1972. In 1983 the Kinsmen Club sponsored the RCMP Musical Ride.

The Archives General File is an artificial collection of accessions which do not constitute separate fonds or collections or cannot be placed within existing fonds or collections. Included in the collection are textual records of many types, such as manuscripts, reports, letters, diaries, speeches, poetry, plans and others; photographs in the form of prints, negatives, transparencies, albums, postcards, etc. sound recorded interviews and programmes; and motion pictures. Material pertains broadly to the Banff area and many other areas within the Archives collecting mandate. Notable items include: Walter Wilcox letter; George Kinney report; interviews with Bill Round and Edward Feuz; original copy of Treaty Number Seven; Mary Schaffer material, including letters, notes, photograph and report; reports on the Nakimu Caves; film pertaining to Banff Winter Carnival; Georgia Engelhard letters and photos; plans for buildings and structures; George Noble photograph; W. S. Park photograph.

Whyte Museum of the Canadian Rockies, Archives and Library, collector

The fonds includes financial records, names of the executive and membership, names of the art courses offered, and some notes on fundraising activities. 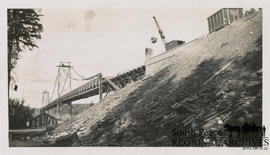 Photograph of the bridge over Peace River at Taylor, BC as it is under construction. 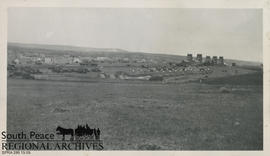 US Army Camp at Dawson Creek, BC

US Army Camp at Dawson Creek during the construction of the Alaska Highway.

The series consists of 9 photographs of bridge construction over Taylor Flats and the Army Camp at Dawson Creek.

The series consists of one CD recording Dr.Murray Carlisle and his son Dr. James Carlisle speaking about his fathers life and a copy of James Carlisle memoirs ""83 Years - A Life Well Lived and Still Going Strong".