The collection consists of institutional artifacts that primarily commemorate events or promote the institution. The materials have been divided into the following series: 1) events, 2) promotional material, 3) flags, 4) plaques. Items include buttons, pins, institutional seals, a signed Griffins jersey presented to Bill Comrie in recognition of his donation to University Athletics, a miniature shovel from SAMU groundbreaking ceremony, flags, a plaque commemorating the official opening of the City Centre Campus from Mayor Jan Reimer, horse gear from the Equine Program, and convocation mortarboard and tassel.

The fonds contains Geof Crossman's obituaries, 2 photographs of him at the Canadian Airborne Centre, 1987, 3 photographs of the Regimental Museum Staff, 1998, 3 photographs of Warrant Officer Crossman at the Military Collectors Club and Gun Show at the Mayfield Hotel August 1998 and 5 photographs of his retirement party, 1999 at the Kensington Legion, Calgary. Textual records include 63 various Canadian Army training manuals, booklets, handouts and binders on parachute procedures, weapons, mines and vehicle identification, an Airborne Association Kitshop catalogue and the Warrant Officer's and Sergeant's Mess By-laws, 1994. Also included are 13 maps of Canadian Forces Bases and training areas and 1 Croatia battle map.

The fonds contains 8 photographs of Princess Patricia's Canadian Light Infantry officers prior to inspection by Lady Patricia Ramsay at Seaford, Sussex England and prior to embarking for Sicily in June 1943. Also included are 2 photographs of Lieutenant Gordon Smith wounded in Sicily, 2 of him sketching and resting during a bivouac, one of his friend Capt. George Corkett, an obituary of Rowan Coleman, a 1996 photocopy of regimental history pages which mention Gordon Smith and 3 messages delivered to the Princess Patricia's Canadian Light Infantry while enroute to and after landing in Sicily, June/July 1943. Includes 4 photographs of wartime paintings, an autobiographical sketch, and a reminiscence on the invasion of Sicily. Includes 2 photos of him at work in his art studio in his late 90s; and obituaries written after his death.

Office of the Vice-President, Resources and People fonds

Office of the Vice-President, Resources and People

Poem and Sketch of Trees and Deer Drawn Using Marker

Fonds consists of newsletters, bylaws and procedures for the Retirees of MacEwan University. 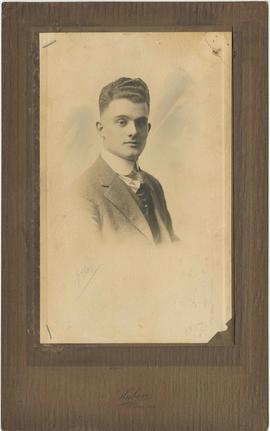 Portrait of Jack Mantle taken at Huber studios in Ottawa. 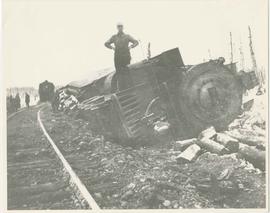 Train derailment causing a rolled over train, there is a man standing on top of the rolled train and men in the background looking at the damage.

Item is an annotated score.