Item is-glen-1338 - "It's Mine! Canada - The Right Land for the Right Man. Canadian National Railways - The Right Way!" 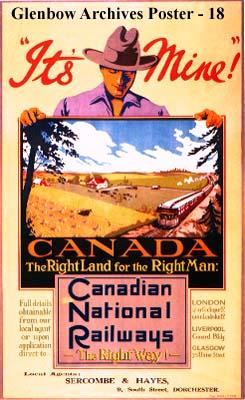 "It's Mine! Canada - The Right Land for the Right Man. Canadian National Railways - The Right Way!"

In May 1969, the second Northwest Resources Conference was held in Grande Prairie, sponsored by the Grande Prairie Chamber of Commerce in co-operation with the Government of Alberta and Canadian National Railways. This conference marked the completion of North America's newest railway, the Alberta Resources Railway (ARR), a 234 mile line between Hinton and Grande Prairie. G. Roger Graham, former vice president of Canadian National Railways, was in attendance at the conference. The three-day event began with the official opening of the ARR by premier Harry Strom on Wednesday, May 28. For the opening ceremonies, Mr. Graham and former premier, the Right Honorable Ernest C. Manning, were presented with hard hats and gloves. They performed the final, symbolical act of clearing away the last obstacle in the path of the construction of the ARR by sawing through a tree trunk spanning the new track in front of the engine. Thursday's program featured speakers from across Canada who addressed conference delegates at the St. Joseph's High School in Grande Prairie. The highlight of the conference was a three-hour ride on the new railway the last day of the conference, with four passenger cars pulled behind the engine. Photographs of this event were taken by an unidentified photographer, reproduced for the participants, and later given to them in albums embossed with their names.