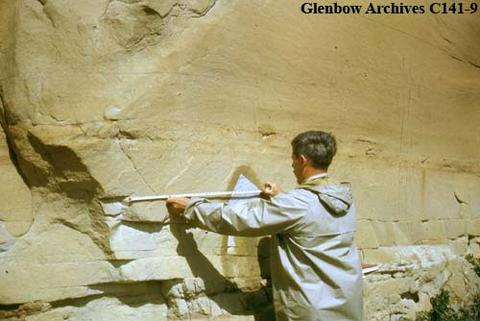 Donald King was born in Cirencester, England in 1912. With his parents, Ernest and Ethel King, Donald moved to Medicine Hat in 1913. He attended Riverside School and Alexandra High School and proceeded on to Edmonton to study pharmacy at the University of Alberta. On his return to Medicine Hat, Don apprenticed at the Pingle Drug Store at 627-2 Street under Percy Yeo. The Pingle business was sold to Liggett L.K. Co. Ltd. in the mid 1940's. Don married Margaret (Peg) Porter, daughter of Mr. and Mrs. Charles Porter, in the mid 1940's. Mr. King managed the Liggett Drug Store for several years. He worked for Stevens Alberta as a surgical equipment salesman. Mr. and Mrs. King moved to Lethbridge in 1956. Don and Peg had two sons- Allan Ernest, born in 1946 and Bruce Donald, born in 1950. Both boys attended Kindergarten in Medicine Hat. The family was active socially in the community. Don was Kinsmen President 1947-1948.

Selwyn Dewdney was commissioned by the Glenbow Foundation to record First Nations rock art in western Canada. He developed a method of tracing the art onto rice paper.<br><br>