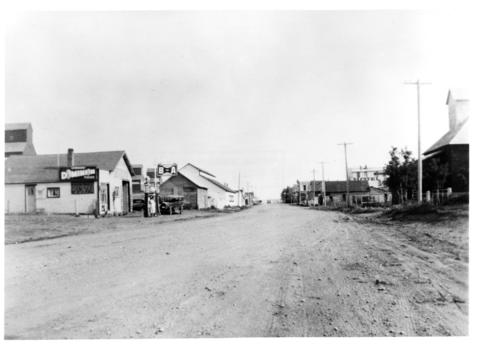 Looking south on Main Street from the north end of Millet, Alberta.

William Harry Bamber was born on September 20, 1885 in Coburg, Ontario to William Frederick and Sarah Martha (nee Smith) Bamber. He moved with his family to Mount Pleasant, Michigan in the United States and finally to Michigan Centre, south of Leduc, Alberta in 1896 where the family took up a homestead at Section 12, Township 49, Range 26 West of the 4th Meridian (12-49-26-W4). In 1903 he moved to Edmonton, Alberta and became a butcher for Gallagher and Hull, and in 1909 he moved to Leduc, Alberta and began work as a carpenter and photographer. In 1912 he built a studio under the name Bamber Studio. He became known for his expertise in portrait photography and in 1925 built a new studio with a skylight to increase the quality of the portraits he took. He married Alinda Elsie Klein on August 10, 1912 and together they had two children, Alwin and Martha. Bamber closed his studio during World War Two for six years and managed his son's photography business in Edmonton, Alberta while he was serving overseas. At the same time Bamber's wife and daughter moved to Calgary to manage another studio while its owner was serving overseas, and in 1947 the Bambers all returned to Leduc. Bamber re-opened his studio and ran it until his retirement in 1964 when his wife and children continued the business. Bamber died on June 3, 1971 and his daughter Martha took over the studio until it closed in 1977.

On the left side is Harold Prichard's B-A garage and the Beaver Lumber shed. On the right side is a feed mill and a blacksmith shop.<br><br>