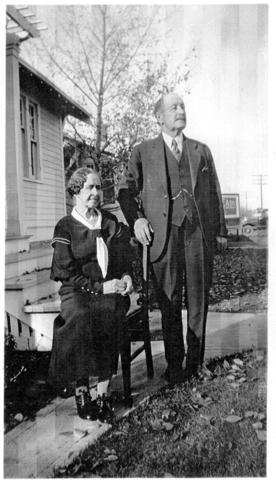 Two portraits of Fred Facey and Catherine Facey. Mr. Facey came from England to Ontario with his parents. He married Mrs. Facey in Rochester, New York in 1880. They lived in North Dakota until 1900 when they moved to Alberta. They came to Millet about 1908. They farmed a dairy farm one mile north of Millet. A few years later they moved to Millet where Fred became a blacksmith. He developed a Delco plant and sold power to Millet residents for many years. In 1928 he sold his franchise to Calgary Power.He later ran a garage. He died of a heart attack in 1937. Mrs. Facey lived out her life in Millet in the same house they bought around 1910 across the street from the United Church.<br><br>