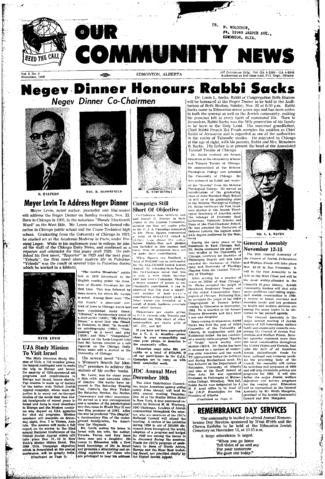 In 1954, the Edmonton Jewish Community Council of Edmonton was established in order to bring a more organized and centralized approach to community affairs. John Dower was named the first president but shortly thereafter Wolfe Margolus was named president and became the driving force behind the council in its early years. The council took responsibility for calendar clearing of community events and fundraising campaigns for local organizations such as Talmud Torah School and the operation of the council itself. In 1955, Max Levy was hired as the executive director of the Community Council as well as director of the council-directed Zionist Council and the Jewish Welfare Society. In 1958, the Council began publishing the <i>Our Community News</i> newspaper. <i>Our Community News</i>, which changed its name to <i>Your Community News</i> in the late 1960s, was published until 1987 when it was discontinued. The Community Council coordinated a Kashrut committee in partnership with the Beth Shalom and Beth Israel Synagogue, which hired a shochet (butcher), mohel (ritual circumciser), and a mashgiach (supervisor of Kosher activities). In 1981, the Edmonton Jewish Community Council opted to merge with the United Jewish Appeal, to form the Jewish Federation of Edmonton, an umbrella group of all the Jewish Organizations in the city.