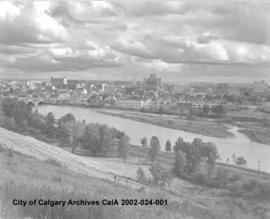 Joseph A. Weiss (1896-1993) was a professional photographer at Jasper and Edmonton, Alberta. Weiss was born in Switzerland and moved to Jasper in 1926, where he worked as a photographer, ski guide and mountaineering guide. In the late 1920s he skied into the eastern slopes of Marmot Mountain and found the area that he later called Marmot Basin. In the 1930s he blazed the first trail into the Basin from the Athabasca Valley for downhill ski enthusiasts. The Lovat Scouts hired Weiss as one of their instructors when they trained in mountain warfare in the Jasper area during the Second World War. Weiss began his photographic business in the early 1930s, specialising in guiding, outfitting and skiing and the production of commercial postcards. From 1945-1955 he operated a photography shop in Jasper and after 1955 he manned a look-out at the Palisades in Jasper National Park. Weiss has a mountain in the Winston Churchill range named after him. He died in February 1993. (This information was provided by the Jasper-Yellowhead Historical Society Museum & Archives.)

The fonds consists of one 8x10 black and white photograph of the Bow River taken from the north bank, west of the Centre Street Bridge, Calgary, Alberta.

Accruals are not expected.