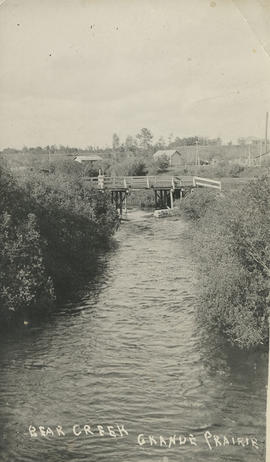 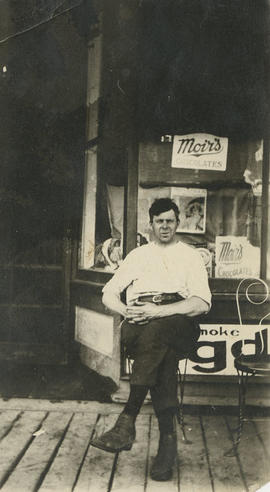 John A.”Jack” Crerar came into the Peace Country over the Edson Trail in 1912 with his parents, Alexander and Sarah Crerar, his wife Ethel (Porteous) and two young children in 1912. They joined brother James “Jim” Crerar who had come in 1910, and welcomed brother Ed Crerar in 1913. Jack filed on NE 32-71-6-6. They farmed until 1917, when they moved into the Village of Grande Prairie so their children could attend the new Montrose School. In Grande Prairie, they set up Crerar’s Confectionary. They had 2 more children: Dorothy, who married Jack Penson from Grovedale and their youngest son, Doug Crerar, who was born in 1929.

Ed and Gertrude (Bowen) Crerar, after proving up their homestead, moved to Grande Prairie where Ed went into partnership in a barber shop with Walter Medlock. He returned to farming in 1944.

The material was donated by Charlie Penson, nephew of Doug Crerar, grandson of J. A. Crerar.

The fonds consists of four photographs and two documents. The photographs are of Jack Crerar in 1924 and Doug Crerar ca. 1940, Bear Creek Bridge ca. 1915, and a Winter Carnival ca. 1924. The documents are a program for the “First Annual Banquet of Grande Prairie Conservative Association at the Empire Hotel Monday, January 17, 1916”; and a program for the “Third Annual Peace River Musical Festival on May 25 and 26, 1927 at Grande Prairie Alberta.” There is also a legal sheet of paper containing a short history of the Alexander and Sarah Crerar family produced ca. 2000.

A finding aid is available at http://southpeacearchives.org/holdings-2/finding-aids/fonds-663-john-a-jack-crerar-family-fonds/

Source of Historical notes: from the fonds and from "Pioneers of the Peace" published by Grande Prairie & District Old Timers' Association, 1975