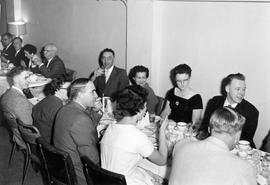 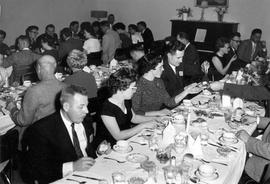 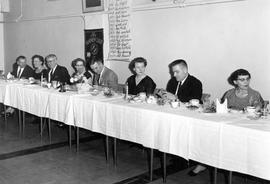 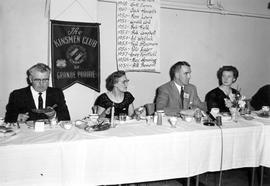 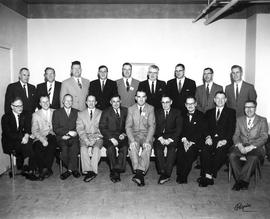 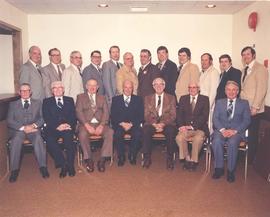 The Kinsmen Club of Grande Prairie was chartered in 1942 under president Tommy Blair. The object of the club was "to promote and direct fellowship among young men of good character" in order to educate and encourage them regarding ethical business practices, the welfare of their community, tolerance and acceptance of all peoples, and service work in their community. The motto of the club was "Serving the Community's Greatest Need.";The original club was made up mostly of men in their late 30s and 40s, but as the local boys returned from the war, they were quickly taken into the club. During the war years they formed a War Charities Trust and raised money for the Milk for Britain Fund, Aid for Russia, and Greek and Chinese Relief. Meetings and Conventions formed the base of the Kinsmen year. Regular supper meetings were held every two weeks, with Conventions in Spring and Fall, Kin Week in February, and Installation Night in June, when new executives were installed and yearly awards given out. The first large community project was started in 1946--raising $24,000 for a swimming pool which was then turned over to the town. The next project was raising $75,000 for a new arena, built in 1948. Over the years the Kinsmen worked on and raised money for many community recreational facilities: Bear Creek Park and its facilities, Bear Creek Swimming Pool, and the Grande Prairie Recreation Complex, as well as organizing the senior hockey club and sponsoring minor hockey. In 1980 they constructed the Kinsmen East Hillside Community Centre. While the club put much effort into large recreational projects, it was not their only focus. Many organizations benefitted from time, goods and money donated by Kinsmen: the hospital, the fire department, municipal government, Sea Cadets, the City's Marching Band, the Victorian Order of Nurses, Alberta Special Games for Handicapped Children, Cystic Fibrosis and Swan Industries. The Kinsmen raised money through personal pledges, raffles, radio auctions, carnivals, bingos, and cultivating a Christmas Tree farm. The Grande Prairie Kinsmen, in Zone 1 District 4 of the Association of Kinsmen Clubs of Canada, was active throughout the Peace Region, chartering the Peace River Kinsmen in 1944, the Dawson Creek Kinsmen in 1950, the Spirit River Kinsmen in 1952, the Valleyview Kinsmen in 1961, and the Beaverlodge Kinsmen in 1974. Two provincial governors were elected from Grande Prairie--Keith Adams in 1960 and Gerry Fischer in 1965, and the club hosted the Alberta Convention in 1960, 1966, 1975 and 1982.

A finding aid is available at http://southpeacearchives.org/kinsmen-club-of-grande-prairie/