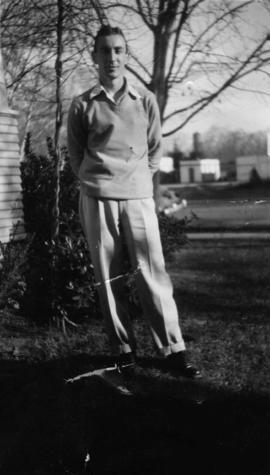 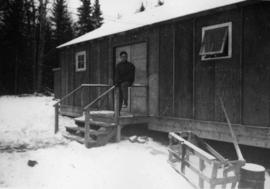 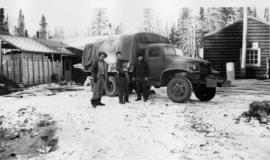 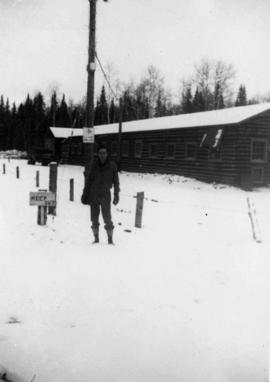 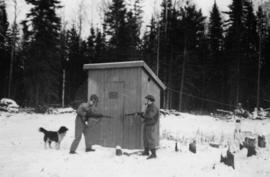 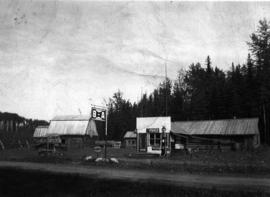 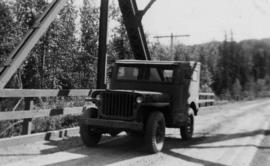 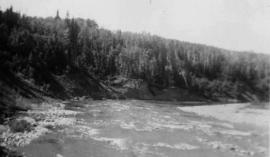 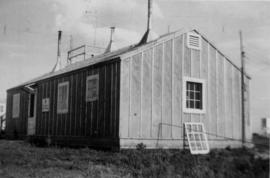 Lee Charles Pooler enlisted in the American Army in 1941, and after basic and medical training, became a weatherman with USAAF, the United States Army Air Force. His first posting was at the weatherstation in Ishek, Alaska, where he was the NCOIC (Non-Commissioned Officer In Charge), and on January 6, 1942, he arrived at Little Smoky in Northern Alberta. The first temporary weatherstation there was at the Royal Canadian Corps of Signals Repeater Station on the old Valleyview-High Prairie Road, about 6 miles north of the Brown's Stopping Place and the Little Smoky Bridge. There were three weathermen stationed here, with their instruments and hydrogen tanks used for balloon runs. As planes still "flew contact" at that time, they had to report cloud ceiling levels. This was on the route the U.S. used to take the B25 Pursuit Planes they were lending to Russia for the war effort, and many of these pilots were women. The station was surrounded by dense bush, so they were also issued with water backpacks equipped with pumps. If there ever was a forest fire, their duty was to keep the telegraph poles from burning so they would not lose communications. Supplies, such as food and gasoline, were brought in from High Prairie, and the men were responsible for all their own care (cooking, cleaning, etc.) as well as for the maintenance of the weather station and the actual work of weather reporting. There was an agreement between the U.S. and Canadian governments which allowed them to "live off the land" and shoot moose for fresh meat. When the weather station at Valleyview was finished, the weather crew moved there. This was a pre-fab Army Signal Corps building with barracks for four men and a weather station with observation platform in the main building. Other buildings on the yard included a garage, a generator shed, instrument shack and hydrogen generation shack. Reports were sent in by teletype every day, and the print-outs were delivered to headquarters at Grande Prairie once a month. In 1943, after a furlough, Lee returned to Canada, but this time to the Yukon. He spent 3 1/2 years in Canada.

The records were deposited in South Peace Regional Archives by Lee Pooler in 2008.

The fonds consists of Lee's oral history of the time he spent as a weatherman for the U.S. Army Air Force at Little Smoky and Valleyview during World War II, a hand-drawn map of the buildings located near Little Smoky between Valleyview and High Prairie, and 22 photographs. There are 3 photos of Lee Pooler himself, 5 of the Royal Canadian Signal Corps station at Little Smoky where the first temporary weather station was located, 8 of the Weather Station on the hill north of Valleyview, and 6 of people or locations in the area.

The records were deposited in South Peace Regional Archives by Lee Pooler in 2008.

A finding aid is available at http://southpeacearchives.org/lee-pooler-fonds/

During World War II Lee Charles Pooler worked for the United States Army Air Force at weather stations in Little Smoky, Valleyview and High Prairie. He spent 3 1/2 years in Canada, and his oral history of this time covers the following topics:

002 Start of tape and introduction

016 Canadian Signal Corps Repeater Station at Little Smoky, where the first temporary weather station was located in the winter of 1942, until the weather station at Valleyview was built. There were three employees, trained as medics and combat personnel as well as weathermen, whose duties included making weather observations using hydrogen balloons, sending weather reports by teletype, maintenance of the station, and firefighting (as Little Smoky was surrounded by dense bush).

125 had to report low cloud ceilings because all the planes "flew contact", including the B25 Pursuit Planes which were being flown to Russia (many by women pilots) to help with the war effort.

208 winter wood supply was "sniped" from the native people who would circle trees with their axes so that they died standing. This would provide dry firewood when they needed it.

250 Valleyview weather station was a pre-fab Army Signal Corps building with barracks for four men and a weather station with observation platform in the main building. Other buildings on the yard included a garage, a generator shed, instrument shack and hydrogen generation shack.

335 description of the interior of the weather station.

390 Treaty Day at Sturgeon Lake Indian Reserve in the company of Constable Brown of the RCMP.

409 Bringing reports into headquarters at Grande Prairie. Mentions Margaret Wilson, a teacher, who was kind enough to tour him around the town.

434 Description of photographs of Lee Pooler taken in Edmonton and after graduation from college.

499 Agreement between the US and Canadian governments that the army personnel could "live off the land"--shooting moose for fresh meat.

527 Codebooks very valuable--When stationed in Ishek, Alaska, reports were done by radio and they were all in code. In Little Smoky and Valleyview, they were done by teletype and therefore not in code.

568 Medical Services to the native people and experiences at Ishek, Alaska. Mentions District Nurse in Valleyview and the natives cutting willows at the Little Smoky.

668 "Spirit Houses" of the native people. The sick set outside if they were about to die, because if they died inside, the house/tent became a "spirit house" and you could no longer live it in.

715 Conclusion: 25 years old and in charge of the station at Ishek. In the army, you had to use all the resources and the training you had gathered in your lifetime.