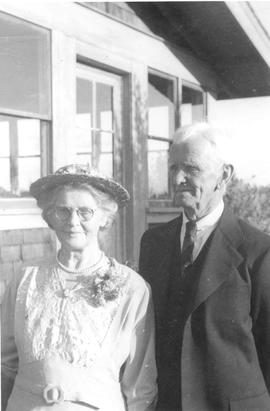 Dr. L. B. O'Brien was born near Toronto on November 28, 1868. He received his education in Toronto, served as a teacher, then returned to the University of Toronto where he finished his B.A. in 1897. Three years later he enrolled at the University of Wurtzberg, Germany, where he obtained his M.D., remaining to do clinical work in Germany and Austria for two years before moving back to Ontario to set up his medical practice and marry Miss Alice John from Extension, British Columbia. When World War I started, he went overseas with the Canadian Army Medical Corps and served in the tent hospitals of Salonika, France, Egypt and England. The couple came to the Peace Country after the war in 1918. When he arrived in Grande Prairie there was only a log mission hospital with 18 beds and a staff of one nurse and one ward aid. These two staff were on duty 24 hours a day and responsible for not only for the nursing, but for the cooking, cleaning and laundry. The operating room equipment consisted of a wooden table and a coal oil lamp. During surguries Dr. O'Brien acted as both anaesthetist and surgeon, and often travelled long distances over undeveloped roads to operate on rural patients. Dr. O'Brien actively promoted the idea of a community hospital, and slowly it came into being: first a local carpenter built a new operating room in lieu of paying his hospital bill, then the Ladies Hospital Auxiliary purchased the only X-ray machine north of Edmonton. By 1922, Hospital District No. 14 had been formed and the hospital taken over by the municipality of Grande Prairie. In 1929, the hospital district was expanded and a large, modern, well-equipped new facility constructed immediately east of the pioneer log hospital. Both Dr. O'Brien and his wife Alice contributed generously to the community of Grande Prairie and were active in civic and volunteer affairs. He served on the school board and was president of the Alberta Medical Association. In 1940, he ran as an Independent for the Grande Prairie Constituency in the Alberta Provincial election. He defeated the Social Credit incumbent and served as an MLA for 4 years but declined to run in 1944. The O'Briens raised five children and were avid naturalists. O'Brien Provincial Park, on the bank of the Wapiti River, is named after them. Dr. O'Brien passed away in 1955.

The records were deposited in Grande Prairie Regional Archives by Margaret (O’Brien) Bowes, grand-daughter of Dr. O'Brien, in 2003 and 2011.

The fonds consists of a 1902 postcard from Dr. O’Brien to Miss Alice John from Germany; 29 over-sized pages of Surgeon’s Reports from 1927 to 1938 listing the name of Dr. O’Brien’s patients, their addresses, the diseases they suffered from and the amounts they were charged; 17 pages of monthly cash reports from 1941 to 1942 and one photo of Dr and Alice O’Brien. The surgeon’s reports date from both the old pioneer log hospital and from the new Municipal Hospital. An accrual includes Alice in a class photo and a biographical story written by her granddaughter, Margaret Bowes.

The records were deposited in Grande Prairie Regional Archives by Margaret (O’Brien) Bowes, grand-daughter of Dr. O'Brien, in 2003 and 2011.

A finding aid is available at http://southpeacearchives.org/finding-aids/lewis-j-obrien-m-d-fonds/