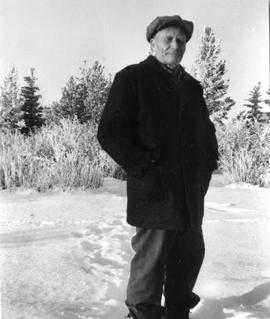 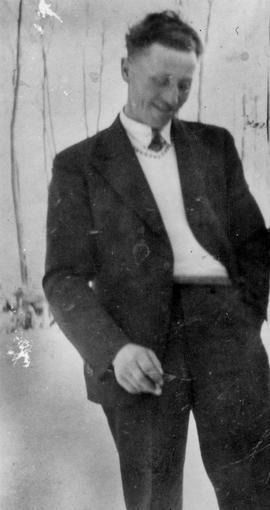 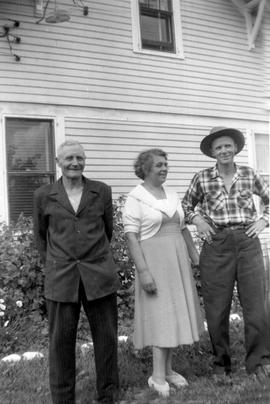 Mathias Eggenheim came to Alberta from Bardu, Norway in 1927 and stayed and worked with the Anneboe and Olson families in Ryley for a couple of years before heading north to the La Glace area. His sons, John and Arthur, immigrated in 1928 and 1929 and Arthur homesteaded on SW 14-75-9 W6. John worked in the coal mines at East Coulee and Canmore, where he died in 1976. Arthur was drowned in 1952 when his car broke through the railing of Pine Creek bridge. Mathias worked at Frederickson's sawmill every winter and spent his summers clearing land with axe and grub hoe. In 1959, he retired to La Glace and spent the next 12 years living in H.D. Bekkerus' yard. He was a good natured soul and liked children. Birthdays were special; he would invite all his friends to celebrate and his hosts would never knew how many people to expect. He passed away in 1964 at age 86.

The records were deposited in Grande Prairie Regional Archives by Doreen Kuryvial, a daughter of H.D. Bekkerus,in 2004.

The fonds consists of the 1927 passport of Mathias Eggenheim, a 1940 election registration certificate, receipts relating to Mathias’ funeral, and three photographs of Mathias and his sons.

The records were deposited in Grande Prairie Regional Archives by Doreen Kuryvial, a daughter of H.D. Bekkerus,in 2004.

A finding aid is available at http://southpeacearchives.org/mathias-eggenheim-fonds/